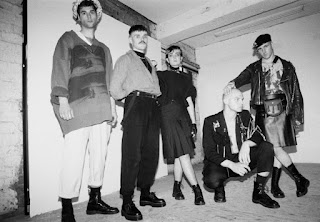 The eighth Ones to Watch 2022 and only third (and final) band on this list so far is VLURE.

VLURE (like Lynks, also on this list) are a band to go and see live. You don’t just watch and listen though. You feel them; VLURE is intense, passionate and devastatingly cathartic. Formed in Glasgow, Scotland VLURE capture elements of 80’s goth, industrial, punk, rock n roll and 90’s euphoric stadium rave and mould it into something vital.

Whether they’re covering the Faithless classic God Is A DJ (complete with lead singer Hamish dancing as if summoning the gods) or blasting out their own heavy hitters such as the pulverising Heartbeat or the emotive Shattered Faith, the VLURE live experience (and it really is an experience) feels like some sort of therapy. You'll probably come out of a VLURE gig shaking or crying with happiness.

VLURE’s debut EP Euphoria is set for release on January 14th through independent label So Young. Go see them if you get the chance and lose yourself.

Email ThisBlogThis!Share to TwitterShare to FacebookShare to Pinterest
Labels: Ones to Watch 2022, VLURE