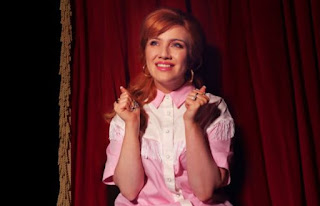 CMAT might be getting a little on the hype train when she proclaims herself as a global pop star on her bio, but a very good pop star she is all the same.

CMAT’s take on pop isn’t perhaps what you’d expect though. It isn’t synthetic, glossily produced and autotuned. Instead it’s a much more old fashioned, traditional and organic take; great melodies underpinned with sounds that are painted by shades of Americana, country and acoustic music – although you might still find the odd squelchy synth here and there.

Hailing from Dublin, Ireland, CMAT (real name Ciara Thompson) is a fan of Dolly Parton and has written a song about chicken – Another Day (kfc). After a string of excellent singles such as I Wanna Be A Cowboy, Baby! and No More Virgos her debut album If My Wife New I’d Be Dead is scheduled for release in February 2022.

cmatbaby · I Wanna Be a Cowboy, Baby!
CMAT - I Don't Really Care For You
Posted by Breaking More Waves Blog at 08:30

Email ThisBlogThis!Share to TwitterShare to FacebookShare to Pinterest
Labels: CMAT, Ones to Watch 2022