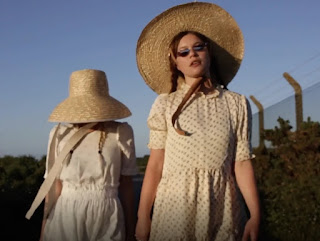 Heading up this year’s Breaking More Waves Ones to Watch list is Isle of Wight indie-pop powerhouse Wet Leg.

From the first time I pressed play on the video for Chaise Longue with its hooky, comically absurd lyrics, simple propulsive guitars, cottage core fashion, dead pan stares and high kicks it was clear that Wet Leg were likely to be ones to watch for the future. Chaise Longue gave me the same sort of buzz that tracks like The Modern Age by The Strokes, I Bet You Look Good On The Dancefloor by Arctic Monkeys and Bros by Wolf Alice (Ones to Watch 2014) gave me when I first heard them.

Cut forward one month after the release of Chaise Longue and Wet Leg could be found packing out a small tent at Latitude festival to absolute capacity - one of the musical moments of the year. People might have come for the one song, but they went away having witnessed Rhain Teasdale and Hester Chambers grinning from ear to ear as they stormed through a set chock-full of catchy tunes; from the likes of the sexy lobster pop of Wet Dream to Supermarket, Wet Leg’s lockdown-dating song, which found Rhain singing of hooking up in supermarkets because it was the only place you could go. Of course, it was always clear Rhain was talented (I’d previously featured her as a solo artist on the blog in 2016) but I certainly didn’t expect this; and judging by the band’s reaction at Latitude, I’m not sure if they did either.

A further month later and I saw them do it all over again at Green Man festival. As the first band of the first day Rhain jokingly announced that they were running the festival in opposite order this year so they were headlining. It was a set that once again confirmed that they have plenty more good songs under their belts. It will undoubtedly be the final time they are bottom of the bill.

Now with shows selling out faster than a speeding ticket and talk of an album, next year is almost certainly going to be a good one for Wet Leg. They have to be Ones to Watch for 2022.

Email ThisBlogThis!Share to TwitterShare to FacebookShare to Pinterest
Labels: Ones to Watch 2022, Wet Leg