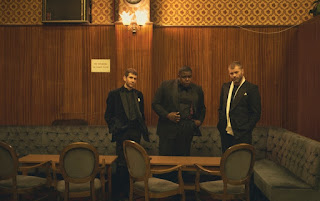 They’re a LA based outfit fronted by the incredible Jacob Lusk who sings with a soulful voice that reminds me a little of Anohni and Nina Simone. That goregous voice is then carried by a luscious orchestrated backing. The songs and the sound are truly beautiful. The first time I heard Gabriels was a complete stop-me-in-my tracks moment. A wow moment. I'm not the only one who feels this way. Back in October Will Orchard, director of Blue Dot and Kendal Calling Festivals tweeted: “Truly, I’ve never seen a gig as extraordinary as Gabriels at The Social, London tonight. Their first ever show. It felt like a privilege to see a band that are clearly going to be absolutely, deservedly, huge in such an intimate space. Their unreleased stuff is phenomenal.”

With a 12" vinyl single released almost a year ago selling out on Bandcamp, Gabriels have been picking up support from the likes of Gilles Peterson on BBC 6 Music - he was an early champion of Sault as well, who in terms of their retro-modern sound share some similarities to Gabriels. And if you do love Sault then make some more room in your heart because you're going to need space to adore these guys as well.

Take a listen and I’m sure you’ll agree. Gabriels absolutely have to be Ones to Watch for next year as they release more new material and play shows. Their new EP (Bloodline - title track below) is due December 3rd. I have a full expectation of them being the ones to see at all the best festivals in 2022 and (hopefully) releasing one of the albums of 2022.

Email ThisBlogThis!Share to TwitterShare to FacebookShare to Pinterest
Labels: Gabriels, Ones to Watch 2022