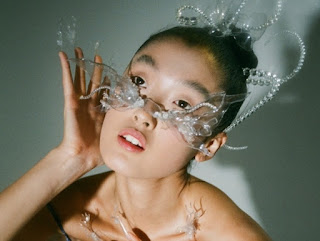 She’s already been nominated (and won) the Sound of Young Scotland Award at the Scottish Album of the Year ceremony in Edinburgh in 2021, played the BBC Introducing Stages at Reading and Leeds Festivals and put out a series of cracking futuristic tunes. Now LVRA is the ninth artist on the Breaking More Waves Ones to Watch list.

LVRA’s music delivers warped, heavy hitting electronics and twisted futuristic production matched with some r 'n' b edging. The Scottish Grimes? There are definitely some similarities stylistically in the sound.

With two EPs out in the world, the debut LVCID released back in 2020 and the second, appropriately called TWO in 2021 plus a new single IN YOUR BLOOD released mid-November LVRA has already been described as ‘an artist not afraid to push the limits’ by Line of Best Fit and ‘thrilling’ by DIY magazine.

And if you’re wondering about the pronunciation? It’s pronounced loo-rah, as LVRA’s real name is Rachel Lu. She's the ninth artist on this year's Ones to Watch list.

Email ThisBlogThis!Share to TwitterShare to FacebookShare to Pinterest
Labels: LVRA, Ones to Watch 2022