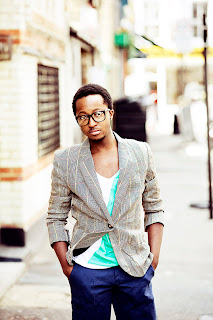 Regular readers will know that when we were compiling our ten ones to watch list for this year in December, we started with far more artists than we could fit in. We chopped some acts such as The Drums by decreeing that their mini album disqualified them, and we kicked the fantastic Marina and the Diamonds into touch as we had featured her in our 2008 list. But this new wave Tinashe was a much more difficult one to decide on. Ultimately our choice came down to almost the flip of a coin and the vague thought that we didn't want our list to be so heavily pop - so Holly Miranda got the vote rather than Tinashe. So here he is now.
Tinashe is a 25 year old singer songwriter originally from Zimbabwe via Hackney. He’s been floating around the music industry for some time now, having originally worked with Sony. Things didn’t work out there but he is now signed to Virgin and has a single called Mayday ready for release on 1st March with an album to follow later in the year.
Tinashe takes a varied mix of influences to his music that could loosely be described as urban modern pop. From the obvious Vampire Weekend referencing A-Liar with its shouts of “Aye aye aye,” and lyrics about his ex kissing his best friend, to the raw soulful ride of Saved - the kind of song that Bernard Butler would love to get his hands on to produce. Another track Mr Presumption brings Jamie T-esque snappy scrappy guitars, wired energy and clattering sticks to demonstrate clearly that Tinashe is no one trick pony. It’s also the only song we’ve heard for a while that has the words “Diddly-squat,” in it. Now that’s a turn of phrase that we should all use more.
The single itself Mayday has a much more modern contemporary pop production to it - and yes, that means there’s even a bit of dreaded auto-tune at the beginning. Is auto-tune going to be the sound that defines this current era of pop music, in the way that the saxophone was synonymous with the eighties or the baggy funky drummer beat became part of the early nineties Madchester sound ? Quite likely we suspect. Irrespective of this though, don’t let this put you off, it’s a good track and Tinashe has a warm strong and uplifting voice to carry it. Also check out the So Shifty remix which is even better, bringing the chorus and the jiggling hip wriggling beat to the fore. Rather like Ellie Goulding another acoustic guitar singer songwriter who has embraced modern production and pop values, Tinashe may have had some gloss applied to his songs, but beneath the shine are fully formed tunes that would stand tall on their own right. Have a look at this simple version of A-Liar (below) to see what we mean.
If you live in London keep an eye out for Tinashe over the next two months as he pops up at various venues including Notting Hill Arts Club, Proud Galleries and the Lock Tavern for gigs. He’s one to watch. (Almost).

Email ThisBlogThis!Share to TwitterShare to FacebookShare to Pinterest
Labels: Tinashe

Absolutely love it, thanks for this fresh wave! Any chance there is an release coming up any time soon?

That drummer is definitely enjoying himself, loving it!

Sorry for not reading the post too well ;) "release on 1st March with an album to follow later in the year"
Do you know The Zolas by the way? It's good stuff too :) http://www.youtube.com/watch?v=xw02vD2Hp3A&fmt=22