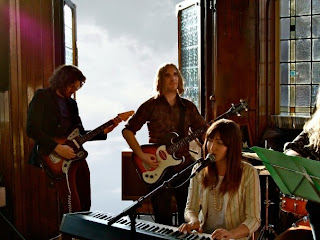 Here is a band that we have already given a brief mention to back in September, in our review of Southsea Fest 2009 here. The group in question are called The Hall Of Mirrors a Portsmouth via London based band, fronted by the twenty one year old singer, songwriter, ex-dancer and pianist Jessica Spencer. Still in their infancy, The Hall Of Mirrors feature seven musicians that include guitar, bass, drums and strings. They are however, very much the product of the emotional highs and lows of the fertile imagination of Spencer herself. That imagination brings a haunting sepia tinted sixties styled pop that reminds us of cult French films, Burt Bacharach and rainy days in bohemian Paris coffee shops. It is a sound that right now for a new band, is pretty damn unique.
Spencer found the piano at a very young age, being fascinated with its sound from the age of two. Since birth the singer struggled with congenital dislocation of the hips, with much of her early life played out in a hospital bed often unable to move from the waist down. With a permanent bar fixed across the base of her back, her legs were pulled out into the splits meaning that one of the only objects she could sit on was a humble piano stool. So it came to pass that she discovered piano from that perch, her mother sitting her there all day as she struck each key to discover its sound.
Spencer suggests her influences are as wide ranging as The Carpenters to The Brian Jonestown Massacre, Ella Fitzgerald to Barrett era Pink Floyd, but probably the most profound is Franz Liszt. It is the passion, romance and fury of Liszt that appears to have inspired Jessica, and it is with this diary of emotions that The Hall Of Mirrors capture the listener. “I fall in love with everyone / everything so a lot of my songs are about love and then also what happens when I quickly fall out of love,” Jessica explains.
Jessica describes the sound of The Hall Of Mirrors as being “Like early spring, when the sun starts to come out. Then some clouds appear and you hear some gentle rain against the window. Then the rain gets heavier and the clouds grow darker, suddenly big booms of thunder echo through the once peaceful morning. The thunder storm passes and you are left with glistening pavements and dew on the grass.” We would also describe the bands music as a soft focus sixties string laden affair where Julie Andrews pulls some heart strings. It’s music of another time and a ridiculously dreamy place.
Although the band have yet to formerly release any material you can hear songs such as the subtly sexy French pop of A Gift From Cupid and the sweet floaty Love Obscure on their Myspace (link via bands name at the top of the post). The band are also playing a variety of gigs and hope to release some material in a physical form at some point in the year. The Hall Of Mirrors are a group who are romantic, sensual, arty without being pretentious, trippy and hazily beautiful. Go look them up.
Posted by Breaking More Waves Blog at 00:01

Email ThisBlogThis!Share to TwitterShare to FacebookShare to Pinterest
Labels: The Hall Of Mirrors

Sweet. Think they are playing some shows in London soon inc supporting Get Cape Wear Cape Fly ? May try an check them out.