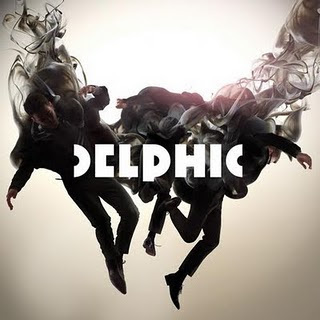 In the late 80’s and early 90’s when indie guitar music was hugely influenced by ecstasy and the acid house phenomenon, the Madchester scene was born. Pale indie indie boys with floppy fringes suddenly got all loved up and baggy whilst the sounds of 808 State, A Guy Called Gerald, The Happy Mondays, The Stone Roses and The Charlatans sound tracked a moment. Indie dance was born. Suddenly it was okay for bands to play dance beats, loops and shimmering electronic sounds. Acts such as The Chemical Brothers, Orbital and Underworld became loved not only by hedonistic clubbers but by indie kids as well. Tribes merged. The blissed out party went super nova.
Manchester three piece Delphic continue the tradition of that scene, but bring it into a modern context with their debut album Acolyte. It’s a solid indie dance album that subtly pulses and grows out of ambient looped electronica that often references the previously mentioned Orbital, particularly the Brown second album and occasionally New Order. Then amongst the meticulous technology Delphic add in carefully placed moments of rush to the head euphoria. In terms of structure Delphic score high.
The trouble with much indie dance is that it can often fall into one of two categories. First, too frostily cool for its own good and therefore not engaging emotionally with the listener. Or second, it can be too celebratory, feeling lightweight, a quick high for the student disco and a drunken one night stand. Delphic have got the balance right in this respect. Acolyte is an album that can be taken seriously, but make you high. However through its subtleties - the perfectly placed beats, the pleasant but never stretching vocals, the flowing loops, it loses something in its overall gut ripping potential. It’s not an album that we could ever love. Like yes, admire certainly, but it wouldn’t be an album that we would want to take to the grave.
However in the context of the indie disco or a late night festival appearance many of the tracks on Acolyte could take on a whole new meaning. Counterpoint with its slamming driving bass and repeated “Nothing, nothing,” refrain that elevates and builds could lead to couples creating babies on the dance floor in a moment of joyous passion. Likewise the twilight zone repetition and dramatic soundscape of opener Clarion Call could act as an exploding call to the dance floor. But on a more intimate listening experience in the context of a home or on the headphones Acolyte is more an album to regard with a degree of esteem for its quality, consistency and clearness of vision than one to worship.
Acolyte is released tomorrow, the 11th January.

Email ThisBlogThis!Share to TwitterShare to FacebookShare to Pinterest
Labels: Delphic

Just toying with buying this. Can't make up my mind about whether it's just a bit too much like New Order. Would you recommend it then?

Ha. Well as I said in the review. It is good, but its not an album we can love. If New Order meets Orbital are not your thing then I suggest you may not like it. I believe at the moment the band are streaming the whole album from their Myspace so why not go there and make your own mind up prior to purchase / non purchase.