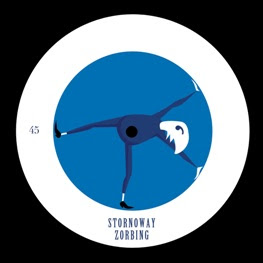 We first introduced the band Stornoway to regular readers here last month, and then gushed at their zoological performance at Wychwood Festival just a couple of weeks later. Now we’re writing about them again, because the Oxford based band have just released one of the most heartfelt acoustic pop songs of the year. It's concise innocence will make you swoon.

Zorbing by Stornoway appears to have absolutely nothing to do with extreme sports mentalists in huge plastic balls rolling down hills, even though the cover of the single depicts one. Instead the reference comes from the lyric “I’ve been singing you this song inside a bubble,” as check shirted lead singer Brian Briggs wistfully describes and rejoices the simple beautiful pleasures of love, his physical surroundings, conkers shining on the ground and breaking storms. Listen to the way he softly enunciates the word cooler into something that sounds like “Coolah” and smile knowing that for three minutes and thirty seconds everything in the world is OK. Reminiscent of early James, Belle And Sebastian and a less glum Noah And The Whale, Zorbing is a life affirming song, that will make adults fling open doors, skip down the road and hug the nearest stranger.
Posted by Breaking More Waves Blog at 00:01

That's the same as the vid on the article above which is the official video ?

What a lovely little song - so refreshingly sincere.