Mirrors - Look At Me 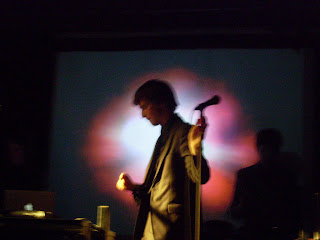 Back in April we first posted about a new Brighton band named Mirrors, who rather like the Fear Of Flying to White Lies transformation, had a direct connection with the band previously known as Mumm-Ra. Mirrors are of course a very different proposition from Mumm-Ra, with a live show that is artily sophisticated and based on a strong visual aesthetic. This sensibility seems to extend to every aspect of the bands presentation, even their press releases. The release for Mirrors forthcoming single Look At Me simply reads “Mirrors follow the straightest of lines. Mirrors are attentive to minutiae. Mirrors are parallel to everything and equal to nothing. Mirrors are a vehicle for refraction. Mirrors are black and / or white. Mirrors are minimally over the top. Mirrors are the practical and aesthetical application of all things mirrors. Mirrors are a pattern for imitation. Mirrors are pop noir.” It reminds us a little of other releases from bands such as Dexy’s Midnight Runners and the KLF / K Foundation who tried to communicate a vision or message a little different from the norm. Pretentious ? Yes. But as long as the music has merit then such sloganeering has its place in pop music.
Since their Great Escape performance Mirrors have already been labelled by certain sectors of the media as a ‘buzz’ band, with all the negative connotations that such a label holds. The danger for Mirrors is that perceptions may be altered before anyone has even heard a note. So for the record, Look At Me is about as eighties as you can get. Full of downbeat vocals, UFO sounds, retro keyboard melodies and hints of early Depeche Mode and OMD. Reflect on the video and draw your own conclusions, but we think its splendid. Look At Me is just the right kind of song for mooching miserably in the corner at the disco to. The single will be released exclusively through Pure Groove records on the bands own label on 7” vinyl and can be ordered here . Mirrors play just a handful of shows this summer including Latitude and Loop Festivals.
Posted by Breaking More Waves Blog at 00:01

Email ThisBlogThis!Share to TwitterShare to FacebookShare to Pinterest
Labels: Mirrors