The B Of The Bang - Beginning Middle End 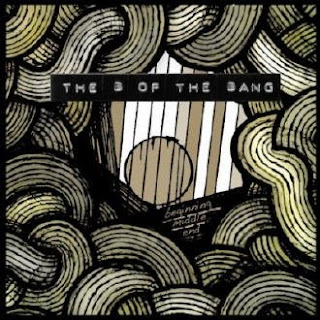 In the same way that Bon Iver is just Justin Vernon, and Blue Roses is Laura Groves, Portsmouth’s Christopher Whitear is The B Of The Bang. Against a backdrop of seaside living, dreary jobs and grotty pub gigs he has gathered together an assortment of musicians to create his debut album Beginning Middle End released on the 8th June through Jellymaid Music

Describing The B of the Bang as “A lo fi, electronic-tinged, anti-folk cake with a gothic, grunge icing,” Whitear gets near the mark. However beneath the enjoyably gloomy sounds and wealth of instrumentation that sees appearances from banjo, guitar, violin, cello, keyboard, glockenspiel, loops, pianos and more, Beginning Middle End often follows a template based on traditional rock structures. For instance, at least four of the songs on this album, Alaska, Lung, Little Bean and A New Road invoke a dynamic of a quiet start, gradually building to reach a climax; yet due to the variety of instrumentation, each song sounds distinctly different. The reference points are many but can be broadly categorised into bands that have an earnest and serious sound; Editors and Radiohead being two obvious influences. However there are lighter touches with the almost chirpy Delores, the vaudeville jazz folk of Alfred Light The Fires and the acoustic medieval campfire balladry of Desire Lines, where rather disconcertingly the band appear to have left a kettle boiling in the background.

Tying these different styles together is Whitear’s baritone vocal, which has a slight warble towards the end of certain notes and occasional over enunciation in the style of a very English gentleman. His voice is at its best when it doesn‘t try too hard to emulate other deep noted singers which he is obviously a fan of. Take (We Used To Draw) Treasure Maps, one of the newer songs on the album. A misty, mystical, folkish song with military drumming and a beautiful backing vocal from Tallie Kane. Here Whitear is brooding with restraint and sounds all the more powerful for it. The addition of elegiac strings gives the song a meaty resonance despite its subtlety. It is worth buying the album for this track alone. Likewise Alaska, with its ships fog horn synth, ghostly asthmatic atmospherics and simple pounding electronic beat works because of its lack of over complication. Pared down to just one line repeated over and over Whitear sings “It only happens once, you won’t believe it when it does,” in a relaxed and hopeful way.

Ultimately Beginning Middle End is a collection of well crafted songs that are often the sum of their influences. It is when Whitear rises above these influences, through simple subtle song writing and not trying too hard that The B of the Bang really finds beauty amongst the shadows.
Posted by Breaking More Waves Blog at 00:01

Any idea if it will be on itunes store? ... I'm guessing it won't be released in Finland just yet!

I believe it will be available to download (from next week) although I'm not sure from which stores. I guess I Tunes and Amazon at least. You can also order a hard physical copy of Beginning Middle End from www.jellymaidmusic.com

from songs on their myspace i'd say i don't really like them, its mainly the singers voice that annoys me. some of the songs aren't bad though - quite well written - the folkier ones are the best.

Well if you're not a fan of deeper male vocals then no, the album may not be for you. But if you are it will fit very snugly into your collection.

Hey emmdee, the album will be available on ITunes worldwide from Monday.

If you want a CD copy then CDBaby has stock and ships via UPS all over the world :) http://www.cdbaby.com/tbotb

I find the soothing baritone a delightful juxtaposition to the obviously camp and effeminate goth image affected by the B himself. The Morris dancing sideline helps keep whole ensemble balanced and within context. Alfred, Light the Fires is a classic track - best heard live, with a glass of Guiness in hand.

Morris dancing ? Now there's a thought. After all The Unthanks have clog dancing on their records, so why not get a bit of Morrris dancing in ?