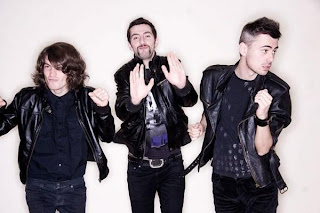 Despite the name, Tesla Boy are not an OMD tribute band, but there is no doubt that they are another group who have opened the cupboard that has been padlocked for a long time; since the eighties to be exact. With song titles like Neon Love and Electric Lady it’s not hard to imagine the sound they make, but we’ll give you a big clue - it doesn’t involve lots of feedback laden guitars or angry shouting.
Tesla Boy are from Moscow, and consist of Anton Sevidov (Vocals), Dima Midborn (Bass) and the rather unfortunately named Boris Lifshits (Drums). With a Russian directness Anton sings “I wanna make love with you all night,” on the aforementioned Electric Lady and “I am so gone, I want your love,” on Neon Love; these boys know what they want for sure. There’s a pulsing camp pop tone to Tesla Boy, the kind of thing Popjustice would love. In fact they already do, having made Electric Lady their song of the day a few months back. Listening to Tesla Boy we can hear hints of European synth bands such as Kraftwerk, The Human League, Pet Shop Boys and Depeche Mode but without the austere coolness, as well as the ambience of eighties American films such as Footloose and The Breakfast Club.
Tesla Boy are very now, but they are also very then. Retro futurist is a term that fits perfectly. They may be too derivative for most, but their mix of interweaving nostalgic synthpop disco sounds and neat melodies could delight the dance floor.