Marina And The Diamonds - The Crown Jewels EP 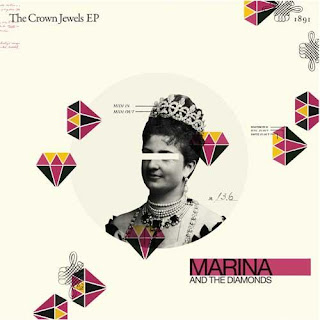 We’re a bit late with this one but last week Marina And The Diamonds, one of our Ones To Watch 2009 released her second single The Crown Jewels EP through Neon Gold before she goes all major label. The EP is the follow up to the gorgeous Obsessions and gives us one thousand and one opportunities to write lots of sparkling clichéd puns about gems of songs, Marina being a shining star and references to her crowning glory. But that would be just too damn obvious, wouldn’t it ? Or did we just do that anyway?

Two of the songs on this EP, namely Seventeen and Simplify were first found on Marinas early demo CD. Each song has been beefed up, but certainly not over produced. This means that the essence of what makes Marina good in the first place, the mix of power and vulnerability, is never lost. This contrast of strength and fragility is developed lyrically on I Am Not A Robot where Marina comes on a little bit Regina Spektor (more of Regina soon) as she sings “You’ve been acting awful tough lately, smoking a lot of cigarettes lately, but inside you’re just a little baby, oh it’s ok to say you’ve got a weak spot, you don‘t always have to be on top.” Naming the EP The Crown Jewels seems entirely appropriate, as the music on this song is stately and majestic, even luxurious in its sound. Seventeen is the other strong track on the EP, more upbeat and poppy. Currently there is no official video, so check out her live performance of Seventeen at Pure Groove records in London below.

Marina is playing a huge number of festivals this summer and has also been writing an entertaining, lively and passionate blog full of debate which you can read here.