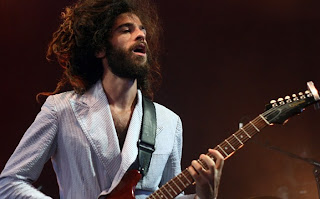 King Charles is something else. Looking like a regal Russell Brand with a beard and the most monumental mop of hair you have ever seen, he brings philosophy, psychedelic guitar riffage, a middle violin breakdown and punch the air backing woops to Time Of Eternity, his debut single.
With claims that he once rescued a baby giraffe from the jaws of a jackal and was soaked in the venom of a spitting cobra, King Charles now talks of a rebellion. This is no rebellion that involves violence and anger though, but instead a more purist rebellion of behaviour and thought. “Let us not be known throughout the world for drunkenness, loneliness, broken marriages, teenage pregnancies, greed, drug habits, gang culture, and everything else that makes us look like people who are lost. But let us be renowned and respected for our wisdom, our restraint, our passion, our honour, our joy, our fulfilment, our trustworthiness and most importantly let us be known as a nation who loves each other.” With sentiments like that we can’t imagine that King Charles has been hanging out with Peter Doherty or the Pigeon Detectives. We’d go as far to say that King Charles is something of a romantic. On Love Lust he sings “Beauty comes and goes, but love stays until the end,” and on the earthy rootsy Beating Hearts “I am with you through eternity until my blood stops pumping.” Bless him, that’s the way to win girls hearts.
It’s taken some time for King Charles to finally release a single, having been kicking around the block for some time now with the likes of Noah And The Whale and Laura Marling. Yes he’s part of the scene that used to be known as new folk, and although some of the chanted vocals and wonky violin share a similar spirit, Time Of Eternity distances itself with a much more ferocious guitar looping sound and a hint of Jamie T. Also watch out for the King Charles updating of Billy Joel’s We Didn’t Start The Fire with new lyrics that reference to Kate Moss, 50 Cent, David Beckham, New Rave, President Obama, X Factor, Facebook, and the aforementioned Miss Marling. The king of pop may now be dead, but here’s a new king for the streets.
Posted by Breaking More Waves Blog at 00:01

Saw him at Glastonbury and he was just amazing! Had never heard of him before but he blew us away! WHAT A DUDE! Hope he makes it - big time!

LOVE this guy - can't stop listening to his tunes since Glastonbury.

This guy is a family friend of mine, and I saw him play for the first time at Lounge on the Farm festival and thought he was excellent.