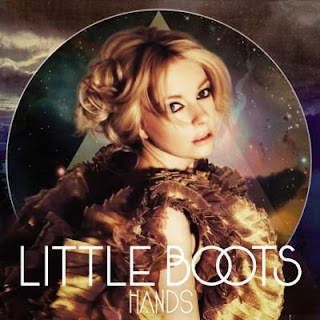 At the start of the year Little Boots aka Victoria Hesketh was the subject of immense media publicity with everyone, including Breaking More Waves, tipping her for the top. A stripped back appearance on Later With Jools and the most downloaded free I Tunes track ever consolidated the opinion that Little Boots was going places. Then came New In Town; after all the anticipation, it was a bit of a let down, particularly as Victoria had made it clear that she wanted to connect with as many people as possible. The resulting Top 20 chart position rather than Top 10 reflected our opinion that New In Town was just disappointingly average. With cool keyboard pop having something of a renaissance it became virtually impossible not to compare the commercial success of the single with that of that other synth wielding disco belle La Roux. In For The Kill by La Roux had sneaked in and throttled the charts, a gargantuan pop hit released at the end of March and still sitting pretty in the Top 10 come the end of May.

So with the release of Hands it feels like Little Boots has been caught on the back foot and has some work to do. Of course Victoria claims that she isn’t gutted about the La Roux commercial success and as Popjustice recently pointed out in a slightly different context, the last thing that UK pop music needs is another pointless chart battle invented by the media between two connected artists, so instead, let’s focus on the album. We ask the simple question; irrespective of chart positions and sales, is the album any good ?

Hands is not the perfect pop album. There is a small amount of filler, some of the songs are flawed and the glossy mainstream production has a habit of sucking the soul from the recordings. However despite these reservations, Hands is also in for the kill, in a smoothly triumphant way, packed with catchy hooks and smart electronic melodies that will set you off on a journey of pop danceteria. After all it would have been too much to expect a one hundred percent perfect synth pop album from a debut, but Victoria Hesketh has a good shot.

When she seductively straddles the line between Kylie and something with an icier electro cool feel Little Boots has the capability to create auditory orgasms. The three tracks where Joe Goddard of Hot Chip had a helping hand all manage to do this; from the pulsing moroderishness of Stuck On Repeat, to the clanking quirkiness of Meddle and the plink plonk handbag aloofness of Mathematics. They are perfect examples of wonky pop; a little different yet accessible. Other victories include the snazzy chorus of Earthquake; hear it once and spend the whole day humming it and the pulsing slow motion of Click, which shows that despite the number of co-written songs on the album, Hesketh can pen a tune on her own. Future single Remedy is very of the moment, with big dirty synth sounds in the verse which echo Lady Gaga’s Poker Face and a celebratory radio friendly chorus about music and dancing amongst a hailstorm of “Oh, oh, oh’s.” The retro futurist grower Symmetry will please those of a certain age (Breaking More Waves included) bringing Phil Oakey from the Human League to a new audience, his vision of pop being similar to Hesketh’s; one part arch coolness, two parts unreservedly disco dancing. Then there’s Tune Into My Heart which sounds like St Etienne without any of the over the shoulder cleverness. All of these songs rise and conquer in a way that reminds us of The Pet Shop Boys, a band obsessed with the notion of pop, but who somehow differentiate themselves with a lack of naffness often associated with the genre.

There are a few blunders though. Lead single New In Town still fails to deliver despite repeated listens. We really think the record company made a mistake with this one. Even worse is Ghost, a lame song made worse by too much oddness and out of place tinny military drumming. However over thirteen songs (including the simple piano ballad hidden track) the target is hit more often than missed and it's often a bullseye or at least a double top.

We know pop is meant to be fun, but seriously this is pretty good.
Little Boots - New In Town