Run Toto Run + The B Of The Bang @ Portsmouth Fat Fox 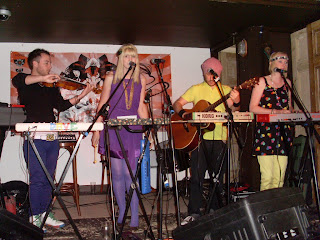 Imagine an evening where men dressed in Miami Vice themed suits play exquisitely dark and raw rock and folk music whilst holding a meat raffle, drop in a bit of Belinda Carlisle’s Heaven On Earth and jump off stage to play fully unplugged. Then as if this wasn’t enough four fairytale like creatures appear to bring Indian head dress, flower patterned xylophones, toy bubble machines and a keyboard called Dave to create a sound like the cute offspring of Hot Chip with added fiddles.

Except this wasn’t imagination. This was true.

The B Of The Bang celebrate the release of their debut album Beginning Middle End by sporting bad eighties ‘taches, aviator shades, ponytails and slicked back hair whilst playing the record in order in its entirety. And although some of the clothing may be Don Johnson’s idea of pastel heaven, the music definitely isn’t. Struggling with technical difficulties the bands set starts sore and angry, Alaska is almost croaking, shat up like a pearl from the aphotic zone with singer Whitear rasping the words in the audience rather than on stage. Lung meanwhile is potent and gratifyingly loud, layered with indecent guitar and puncturing noise. As the set continues the band seem to relax a little and appear to be enjoying themselves. “I don’t know how they managed to wear suit jackets in the eighties,” announces Whitear as things begin to heat up. Doing the sensible thing he finally discards it as his group join up with Jellymaid Music label-mates The Dawn Chorus to perform Last Day On Earth fully unplugged on the floor of the venue. The stage itself is like a revolving door, constantly delivering and spitting out different band members. During the crowd pleasing Delores its breathing space only, rammed full of musicians and equipment whilst on the haunting and fragile Desire Lines Whitear plays solo. Seeds finds the band in double drumming glory, sounding huge and stirring, even in a grotty pub venue. Towards the end the shift is towards a more folkish sound, with the appearance of an accordion for set closer New Road, which ends the fiery set. Its a long way from the world of Crocket and Tubbs, but then there are only heroes here and no villains to pursue.

Its not often that electronic music is described as beautiful, organic or natural but that is exactly the sound of Run Toto Run. Lead singer Rachael Kichenside has a flower like velvet soft voice that weakens knees, whilst the rest of band add almost minimalist folktronica, with accomplished acoustic guitar and fiddle. It’s charmingly twee but faultlessly modern. Run Toto Run look as if they’re waiting for the firing line lined up at the front of the stage, but they are going to charm their way out of it. Thanking everyone from the promoters Hong Kong Gardeners who rescued the doomed gig following its cancellation with another promoter, the B of the Bang and even this very blog, Run Toto Run are incredibly endearing. Single Your Face has been beefed up from its delicate twinkling acoustic form, showing the bands progression from pastoral schoolyard folk into the world of synthtopia, whereas the circus oompa of Full Stop sees the band leaning over and stealing a sneaky stab of each others keyboard in comic effect. Catch My Breath is the moment where the fairy folk discover samplers and create a breed of twitchy stuttering electronica. Despite the cuteness there are moments when it feels like Run Toto Run are going to pull the skin from their faces and reveal that the animal masks they sported on Sleepyhead are real, kicking into a tirade of hard full on dirty beats that Aphex Twin would be proud of. It never actually happens, but it’s easy too imagine it could. Instead they finish with their cover of Sleepyhead, taking the song to a new paradise. Run Toto Run are bewitchingly lovely, masks just divert from that fact.
Posted by Breaking More Waves Blog at 11:54

Email ThisBlogThis!Share to TwitterShare to FacebookShare to Pinterest
Labels: Run Toto Run, The B Of The Bang