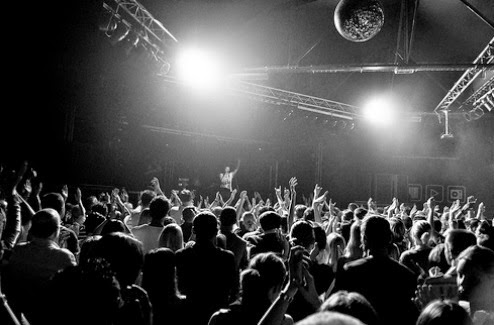 At the end of this month we’ll be bringing to conclusion the project we’ve been running all year, namely to establish how much we’ve spent on attending gigs and festivals in 2014, including travel, drinks at the venue, accommodation and any merchandise we’ve bought at the show.

For now though we’re briefly summarising November’s activity – there’ll be a longer more detailed post later this month after Christmas with a full round up of the year's spend and our conclusions.

In November we went to 7 gigs. None of them were in our home city – we journeyed a minimum of 100 miles round trip to attend any one of these shows. They included gigs in Brighton, London and Oxford. For the London shows we stayed over (we’ve seen a lot of Travelodges in 2014) as we combined the trip with various other cultural activities as well as some Christmas shopping.

Our total spending breakdown for November was:

Thought for the day: For the amount we spent attending 7 shows we could have purchased around 40 albums on CD or bought an iPad.

Be sure to read our concluding post on this project after Christmas. We'd be particularly interested to hear from you about how much you spend on live music, particularly how much you spend on travel to shows. Do you stay local or are you prepared to go further afield? One thing we've noticed in conversations with others is that those who live in larger cities (London, Manchester, Glasgow etc) are far less likely to travel out of their city and should an artist they like not play where they live they are less likely to put themselves out and get on a train / drive etc some distance to see the artist - possibly because they're too well treated for live music in their own cities.

I live in Christchurch and made it to 42 gigs this year, with a possible 2 more to come. Consists of 22 London gigs, 14 Southampton, 3 Bournemouth, 2 Brighton and 1 York. Missed another 3 because of illness.

Biggest expense is train fares. £34 to London and £11 to Southampton is the going rate. I'll usually have a pint, too, and that's the best part of a fiver these days.

Surprised you only have 3 in Bournemouth given your location!

The train prices from Portsmouth to London are similar - I sometimes use the coach (which if I book early I can usually do for about £10 return) or there's also Megatrain which I can usually book for £1, 2 or 4 each way but I have to travel at unusual times. I also drive quite often which can work out cheaper if there's more people in the car and they contribute to petrol - although this tends to depend on the passenger!

Wish I could go to more gigs but lack of money and babysitters means it's a no-goer.

9 gigs this year all local in Reading, mainly free, although one cost £10.

I live in London.

I've never considered going to see a gig in another town. Why would I?