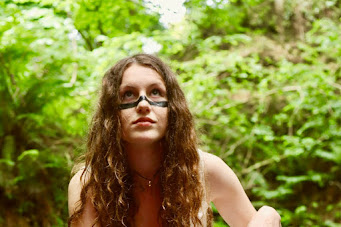 Today’s new artist channels elements of Bonnie Tyler and Suzi Quatro in her commanding vocal delivery, whilst creating a forceful and raw sound that could have easily come from any decade - except the last one.

It’s this out of fashion approach that makes Amy Montgomery from Belfast, Northern Ireland stand out. She is definitely not a Billie Eilish copycat and is all the better for it.

Amy describes her music as “alt-rock inspired by experience, nature and search for truth.” Nowhere can that be heard more than on the cathartic lead track from her most recent EP Intangible. This tour-de-force of a tune is about her mother, who committed suicide when Amy was just 16 years old. Yet despite the tragic subject matter Amy makes the song truly uplifting: “I know this sounds like a strange thing, but I think it’s pretty nice that when we’re gone the birds will still sing.” It’s accompanied by a video that, despite being relatively low budget, makes good use of sheets and coloured dry ice to reflect the song in a powerful and compelling way.

The aforementioned Bonnie Tyler similarities really come out elsewhere on the Intangible EP though. The song Jupiter 4 is a huge ballad which finds Amy’s vocal not just reaching for the skies but pole-vaulting the clouds in rasping glory. It’s huge. Old Photographs is another one – the piano may be soft and restrained but from the off Amy’s vocal kicks butt. It makes the likes of Florence Welch from Florence and the Machine look slight and meek.

Her sound might belong to a musical style that you assumed was long lost. But with live performances where she appears bare footed, adorned in war paint and in flamboyantly bohemian stage-wear, plus the big songs to carry it off, it’s clear that Amy Montgomery has other ideas. Write her off at your peril.