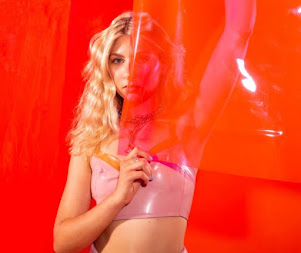 Today’s new artist is Blu DeTiger. She’s a purveyor of funky-strut-your-stuff pop and yes, she’s built quite an audience on the platform of choice for the early 2020’s – TikTok. Over there you’ll find, alongside her 1 million other followers, videos of her jamming out over pop classics with her bass guitar; Grover Washington Jr and Bill Withers track Just The Two Of Us and Dua Lipa’s Don’t Start Now as being two such examples.

Hailing from New York City, Blu is a producer, a DJ (she was blagging her way into clubs before she was 18) and has already toured with Caroline Polachek She’s also a former member of the band Kitten.

Of course, blowing up on Tik Tok is no guarantee of any longevity, but the handful of songs Blu has released so far have done pretty well on streaming services. 2020’s Figure It Out is the big one so far with 22 million streams on Spotify and counting; it’s all about a slinky bass line and languid not trying too hard vocal delivery.

The recently released Vintage (which you can find on the Breaking More Waves weekly playlist until Friday just click here) has, for me, a bigger punch. With its tongue firmly in its cheek it finds Blu singing about how she needs a ‘Vintage Boy’ to be an accessory to compliment her outfit. “He looks so good showing up at karaoke night. He knows all the words to Mr Brightside, he says it’s a joke, but I know it’s honest, it’s so ironic, it’s  iconic, I get off on it,” she sings.

Whilst Blu sounds modern and fresh, there are plenty of nods to the past, particularly the 70s and 80s. With what sounds suspiciously like a sample from Thomas Dolby’s Hyperactive and some beats that sound like they’ve come off an old Street Sound Electro compilation, Tangerine is once again all about the bass grooves and a certain aloof coolness in the vocals. Mad Love could perhaps be an out take from a Janet Jackson or Paula Abdul album.

If a fusion of funk, pop, electronic and nod along grooves gets you roaring, then take a listen to Blu De Tiger. Her debut EP is out soon.