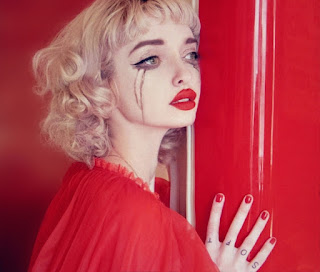 I’m not even sure if she is real.

Is she just an internet-born character? Is she ’a séance with Norma Jean starring as Marilyn Monroe hosted by Julee Cruise’ as her biography reads? Is she just a creation of those at label Italians Do It Better? Is she actually an alien? Or perhaps she is just a dream?

Whoever she (or they as Glüme may well be a collaborative project) is, I don’t care. David Bowie, whilst talking about authenticity as an artist described it as being about following a personal vision and inspiration, whilst pushing the boundaries of comfort and normality.  Glüme seems to be doing this. There’s a real vision here all wrapped in the beautiful package we call pop.

Born and raised in Los Angeles, we’re told that Glüme was a child actress and juggled time between training her voice, exploring music and living with a heart condition called Prinzmetal. Later this year she’ll be releasing an album. It’s called The Internet, a title which sits perfectly with her art.

The small number of tracks she has online so far range from electronic cotton wool takes of 1950s US number ones (Come Softly To Me by The Fleetwoods) to retro futurist electronic pop tunes with darkly dystopian sounding intros and a video that features tapdancing and colour aesthetics that the White Stripes would be proud of (Get Low).

Then there’s the sensuously dreamy Body, her most streamed track to date, which is about her ongoing health issues: “Body is about returning from an episode get with my heart disease and starting to notice each part of my body working again.”

All of these songs, which are part sung, part spoken merge to create something both otherworldly and unsettling. You can hear it on Don't @ Me, the video of which certainly has some elements of the atmosphere of  director David Lynch. Then there’s a cover of Britney as well, which takes ….Baby One More Time to a new place – first stripped back to just guitars before all the instruments drop out and it’s just Glüme’s voice.

Glüme - Come Softly To Me (Video)
Posted by Breaking More Waves Blog at 16:15