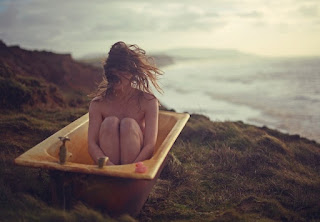 Before I even get to the music there's a couple of points that need to be addressed in connection with RHAIN (real name Rhian Teasdale). First I'm not exactly sure where she's from. A recent feature on Drowned In Sound suggests Bristol, but her Soundcloud states the Isle of Wight. However, as The Stone Roses once suggested, it's not where you're from, but where you're at and Rhain is certainly at a good place musically.

Secondly, I have to mention the bathtub. If you've spent any time on Breaking More Waves you'll know that I've spent a lot (some would say too much) time pondering why it is that so many musicians have a desire to promote their music by having a photograph of themselves in the bath (for example this post here is just one of many). The only conclusion I've come to so far is that it's because they're bonkers, but I suspect there's some deeper underlying psychological issues going on here. RHAIN has very sensibly gone for the taking her clothes off option (important if you really do want to get clean) but alas has forgotten to put any water in, as well as the fact that the bath is outside and therefore somewhat exposed, both visually and in terms of the cold windy weather. It seems that musicians like getting in the tub but very few of them understand the concept of bathing.

So now to the music. It's good. Very good even. Humdrum Drivel is the first song on her Soundcloud. It's an otherworldly piano ballad that falls somewhere between Regina Spektor and Joanna Newsom in terms of its crisp idiosyncratic vocal delivery, sung with every word perfectly formed and enunciated. It's pretty special and benefits from its sparseness and haunting oddity. You can see why she's already caught the attention of a variety of gig promoters, having picked up support slots alongside fellow Isle of Wight boys Champs, tUnE-yArDS and Olof Arnaulds to name just a few.

Email ThisBlogThis!Share to TwitterShare to FacebookShare to Pinterest
Labels: RHAIN