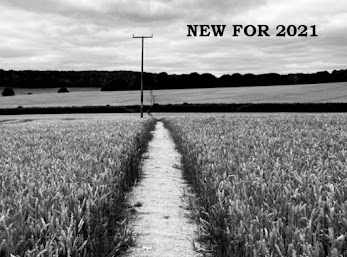 As we all know 2020 wasn’t the year most hoped for. Boris Johnson’s “This is going to be a fantastic year for Britain,” tweet on January 2nd 2020 at least showing us that nobody knows exactly what the future will hold - even if you're the leader of a country.
But despite this, looking to the future is exactly what Breaking More Waves is going to be about in 2021. This year I’m going to be doing nothing else on the blog but introducing new artists. So let's hope it's going to be a fantastic year for them.
Since I started Breaking More Waves I was always a fan of the likes of Paul Lester’s Guardian New Band of the Day column (read how it ruined his life here) and Joe Sparrow’s A New Band A Day blog which managed 10 years before having an extended rest.
On Breaking More Waves I’ve always run new artist type posts, be it under the heading New Waves or just plain old Introducing; the difference for 2021 is that's all I’m going to do. I won’t be posting daily, nor will I have a schedule. I might post three things in a week, then nothing for a month. I might write ten words or ten thousand. There will be no follow ups or no long-term support via the blog (sorry artists - but I will buy / stream your music, come and see you live and talk about you on Twitter here) I’ll also be updating my new music playlist on Spotify, not just with brand new artists, but with any new releases I like and come across, from established as well as new acts, although the playlist will no longer be monthly, but weekly, usually updated and refreshed at the weekend.
What is new and what isn’t is debatable of course. Not every artist I feature on the blog will have just released their debut song. A good example is Ashton Nicole Cassey, better known as Ashnikko, who released her first official material in 2018, but had tracks like Damsel on Soundcloud as far back as 2014. Yet I didn’t feature her as a new artist on Breaking More Waves until early last year; her debut long play mix tape due in the next month or two.
So that’s the plan. 2021 is all about the new. In summary – there will be a weekly new music playlist on Spotify, starting once new music really gets going (click here for the current monthly playlist which will become the weekly playlist) and irregular introducing posts here on the blog, imaginatively titled ‘New’.
Let's hope 2021 is better than 2020, but let's all also remember this is a marathon not a sprint.
Posted by Breaking More Waves Blog at 11:00