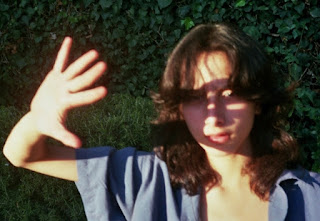 The last few years have seen a noteworthy rise in young artists making pop music that has its roots in lo-fi diy production. Whilst many of them fall by the way side, the cream sometimes rises to the top and so it is that we now have the likes of Girl In Red, Clairo and Beabadoobee all commanding positions way beyond their small bedroom beginnings, often then producing glossier and more heavily produced work.

It’s very early days, but Kali Flanagan (who goes just by the name Kali) could well be the next musician to join that group.

Having taken up songwriting in her teens and formed an indie-surf-rock band called the Big Wednesday (named after the 1978 film) where she wrote and taught the band all the songs, Kali has now turned solo. Last November she released her debut track Back To The Start, which made that jump of being beyond lo-fi. It's a dreamy pop tune with a hooky guitar riff, restrained vocals and even some strings to flesh out some swooning drama of a relationship that just won’t let go: “You led me to think things were real, then I moved on, and now I’m back here,” she sings.

This 16 year-old from Los Angeles is sprinkling her blissfully cool riffs and melodies with a dusting of magic. Now let's watch her grow.

Kali - Back To The Start

KALI · Back to the Start
Posted by Breaking More Waves Blog at 08:30