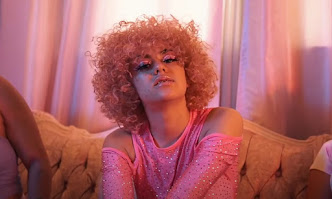 Today’s new artist is a potty-mouthed rapper from the USA who has gone viral on Tik Tok and has one track that has over 50 million plays on Spotify. Yet if you’re over 25 there's a high chance that you'll have never heard of her.

Meet ppcocaine, an artist who makes Megan Thee Stallion or Cardi B seem like a beige Gary Barlow. She makes the sort of hyper-sexualised pop-rap that you really shouldn’t play to your parents.

Take her track DDLG. It might start out with a simplistic nursery school notation of I’m A Little Teapot, but when ppcocaine lets rip mum and dad will almost certainly be blushing and / or tutting with disapproval: “I’m a little cumslut short and loud, bend me over and I will shout.” It doesn’t get any cleaner as it goes on. Take recent December release S.L.U.T which continues the confident feistiness and reminds me of a more intense take on Daphne and Celeste’s U.G.L.Y: “S-L-U-T, yes, I'm a slut, they all wanna fuck me (Fuck me), S-L-U-T, yes, I'm a slut, nigga, wanna wife me? (Wife me).” There’s a similarity in ppcocaine’s tracks to Breaking More Waves One to Watch 2021 Ashnikko as well, but this is X-rated cartoon lewdness taken to the extreme. You probably shouldn't enjoy it. But you probably will.

Previously known as trapbunniebubbles, ppcocaine is actually 19 year old Lilliane Catherine Dixon. She’s only been releasing music since June of last year, but has already found a big audience. The difficulty might be translating this into something more long term. (But then remember I said that about Charli XCX over 10 years ago and look what happened there). But maybe I’m missing the point. Maybe this is just about the here and now? Maybe just press play and go with it.