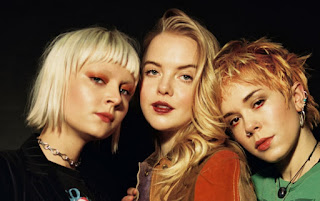 I’ve always been a fan of groups of musicians who look the part. Bands not bland please. Some groups forget this. When you record a song you’re a musician, but once you go on stage you’re a performer. All the great bands have great songs, sure, but live they have identity and personality as well.

Dream Wife seem to understand that. Their shows are fierce; lead singer Rakel prowls the stage with a look that seems to vary from contemptuous menace to knowing cool whilst Bella and Alice pummel their instruments with a real intensity and enthusiasm. They look like a unit, ready for war. I certainly wouldn't want to pick a fight with them, OK I wouldn't pick a fight with anyone, I'm a lover not a fighter, but you understand what I mean I'm sure.


For those who have been to a Dream Wife gig, new release Fire will already be familiar. It’s all about that surge, that rush, that emotion, that moment of connection, about dancing, screaming and holding each other tight. Of course, fires don’t last forever but let's enjoy the heat whilst it lasts. Three and a half minutes of edgy indie-art-pop that burns with a spike.

Dream Wife will be back out on the road this October. Dates can be found by clicking here. Fire will form the lead track of a new EP released on 29th September which will include three remixes of the song as well as previously released track Somebody.