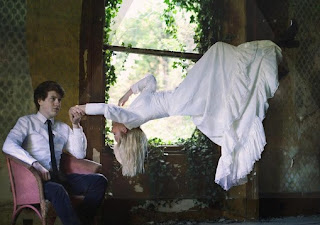 Cast your mind back to our Ones to Watch 2013 series and you may remember Hertfordshire duo Chasing Grace – they of recent name changes and disappearing Soundcloud pages. We introduced them by suggesting that you should imagine Slow Club jamming with Ben Howard, but now we’d like to alter that suggestion a little on the evidence of the first song they’ve uploaded to their new Soundcloud account. This cover version of Swedish House Mafia’s Don’t You Worry Child sounds more like Ben Howard backing a UK version of Kelly Clarkson. Odd? Quite possibly, but then even the idea of an acoustic version of Swedish House Mafia is a bit of an odd thing isn’t it?

But let’s remember one of the main laws of pop. (It's in Chapter 1 paragraph 1.0 of the Golden Rules of Pop so it must be important) Odd is good. As long as it’s not illegal.

So press play, have a listen and if you find it odd, remember the golden rule. If you want some of that odd / good stuff just give the band your email address and voila you've got it as a free download.

Want to know more about Chasing Grace? Then why not press play on the video below which shows the ‘highlights’ of their recent dates supporting Devlin. In summary those ‘highlights’ include going on a train, standing around a bit, playing some music and walking around a bit more. Yes, we admit this is not particularly odd for a band and therefore probably not that good, but as the video is only three minutes and forty five seconds long we have no idea what they got up to in the other ten thousand or so minutes of the tour. That’s probably where the odd stuff happened.