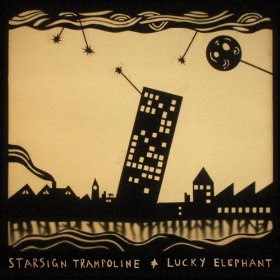 It is an inevitable fact that end of the year album lists will invariably be somewhat homogenous. If an artist has put out a great album it gives us faith in human ears if as a species we are collectively able to detect this greatness. The evidence is end of year lists showing some degree of consistency with each other. However our different make ups will mean that understandably some albums that are enthused about by some will be less loved by others.
Sometimes however wonderful albums just don’t quite get the exposure they deserve and are not therefore placed up for consideration at the end of the year. Starsign Trampoline by Lucky Elephant is one such album.
A beautiful treasure trove of organic, vintage sounds created from wurlitzers, melodicas, pianos, acoustic guitar, glockenspiel, and organs all topped off with the romantic sound of lead singer Manu’s wonderfully French accented nasal tones, Starsign Trampoline deserves a bigger audience than it has obtained. Every song on it is perfectly and tenderly crafted with real attention to detail. On this album you will find songs such as the melancholic The Pier where Manu laments the coming of the commercial tide to his seaside town and the destruction of its identity. Further on the dusky glowing chimes of the environmental Call It The End (The Beginning) sound sweetly sagacious as Manu sings “The iceberg is our ageing dreams, and if you let go don’t fight the windmills.” Starsign Trampoline also features a number of superb instrumentals - the cartoon like self titled Lucky Elephant, the laid back Burn Down The Acres and the restful and comforting When You Fall To Earth. These instrumentals are not mere filler, but key tracks in the albums construction.
Starsign Trampoline is an utterly charming album that earlier this year we compared to a summer evening. It works equally as well in the winter, such is its timeless quality. It’s our little secret, but we don’t mind if you tell the rest of the world.
Our original write up was here
Posted by Breaking More Waves Blog at 00:01