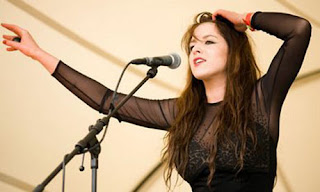 Way back in January 2009 we first posted an article about Clare Maguire, an artist that we had seriously considered putting on last years ones to watch list, but eventually decided it was just too early - Maguire having played a handful of shows and only just signed a record deal. You can read the article here . Instead we put Marina and the Diamonds on the 2009 list, which in retrospect was also a little bit early.
Since that article there has been absolute silence from Clare Maguire. Her Twitter has yet to twitter. Her Myspace has no songs on it to listen to. There is no You Tube footage to view. A Google search reveals very little at all about her that we didn’t know in January. To our knowledge she has played just the one show this year - a support slot in Glasgow back in January, but since then absolutely zilch.
There are however a few rumours. We’ve heard that she has been working with uber pop producer Richard X as well as ex-Longpig Crispin Hunt, but at this moment in time this is just idle gossip and certainly does not come with any certainty.
Then in October, two days before we were about to publish an article entitled Whatever Happened to Clare Maguire, Paul Lester from the Guardian jumped up and wrote a piece about her on the Guardian web site, which suggested that although her record label, management and PR company were keeping very tight lipped about her, 2010 would finally see a release from the reclusive lady.
So let us remind ourselves why we fell head over heels for Maguire in the first place. It took us just one listen to the demo’s that we heard at the start of the year to realise that Maguire has a simply staggering voice. It is huge and gutsy, full of powerful Celtic soul, blues and jazz influences that puts her right in line with big singers such as Amy Winehouse and Adele. Not bad for a former shop checkout worker from Birmingham. Throughout the year we have often returned to those demo’s and each time we listen the songs of Burn, Strangest Thing and Butcher Boy we are astonished at how punch in the stomach incredible they are.
If a 2010 release from Clare Maguire arrives and it comes anywhere near the quality of those demos, we predict she could win a lot of fans. She has to be one to watch.
Posted by Breaking More Waves Blog at 00:01

Email ThisBlogThis!Share to TwitterShare to FacebookShare to Pinterest
Labels: Clare Maguire, Ones To Watch 2010

Link for the demos, please

Sorry we don't post links to demo's unless we believe we have been authorised by the owner of the music to do so.

Update : Clare Maguire has been spending time this year recording an album with Fraser T. Clare will be performing at the Lake Stage at this years Latitude Festival and we fully expect her profile to gradually develop from there.

And here's the verdict on Clare Maguire at Latitude http://www.breakingmorewaves.blogspot.com/2010/07/latitude-2010-review-part-2.html