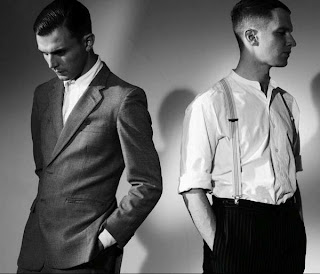 Hurts are the first of two acts on our ones to watch list for 2010 that threaten to bring an ostentatious, stern, eastern European look back into fashion for bands. There was a time before brit pop and grunge when many a group that marched out of art school brought obscure literary references, intense synth darkness and an aloof composure to the stage that has been all but forgotten these days. Certainly visually Hurts are likely contenders to bring it back. They are also the only band on our list who are not afraid to drop a saxophone solo into the middle of one of their songs.
With such a tasteful visual aesthetic that includes perfectly formed haircuts and smart suits - we're thinking young Gary Kemp from Spandau Ballet here - together with a Myspace blog that posts excerpts of Larry Cuba’s 1980’s film Calculated Movements with its animated computer programmed grey white geometric trajectories - what is surprising about Hurts is how accessible, radio friendly and commercial their music sounds. It's modern, (and by modern we mean modern production values with a hint of 1987/88 to it) lush synth pop that more than justifies its existence, whatever the bands image. Rumours abound of songs that hint at Violator era Depeche Mode, or Ultravox when they were good, but for the moment the bands label are keeping many of these songs very much locked away.
Hailing from Manchester Hurts are Theo Hutchcraft and Adam Anderson. They have a past history with the two of them previously having been in the band Daggers. They are currently putting the finishing touches to their album in Sweden and are due to play a handful of special shows in February, including a church and a hidden crumbling old London theatre. We will be watching for them with interest in 2010 to see if the public push them chart bound. We suspect there is a chance. A pretty good chance.
Posted by Breaking More Waves Blog at 00:01

Email ThisBlogThis!Share to TwitterShare to FacebookShare to Pinterest
Labels: Hurts, Ones To Watch 2010

Totally in love with this pair. We are currently writing our list of the best tracks to enter our inbox through 2009 and Wonderful Life was definitely a highlight. Totally agree they have a future and alongside Wolf Gang they have that mid 80s pop sound tied up...
Mike

Robin. Thought you said this years list didn't have as many acts with commercial potential on it as last ? So far I think you've picked 2 massively commercial artists. Love Hurts. Wonderful Life is amazing.

Glad you're both liking Hurts and yes both Hurts and Ellie Goulding have commercial potential (time will tell if if turns into commercial reality). Tomorrows artist is less likely to be gunning for the Top 40, but is of high quality and seems to be an interesting personality as well.

Mike - Wolf Gang still isn't really doing it here I'm afraid, although The King And All Of His Men has grown on us a little.

Thanks for the comments. Always welcomed, even if just to say we are talking rubbish. (We sometimes do)

I remember that Hurts had a couple of tracks up on the Myspace at the very beginning but wasn't as sold on those as 'Wonderful Life'.

Presumably they've spent most of this year honing there talents, as they certainly can't be accused of hogging the limelight.

Hi The Bubble Boy. I've come across your blog several times when googling and on several google alerts I have, so I'm going to add you to my regular read list. Keep up the good work.

I think (although am not 100%) that one of the songs on the Hurts Myspace was Unspoken but it got taken down.

Some other thoughts on Hurts...It's interesting to see on various pop message boards how Hurts are a real talking point since the BBC Sound Of List announcement. The word hype is being used a lot, on the basis that the group haven't played live yet and people haven't heard many songs (a rare thing in this age of instant access to everything). For 'hype' we translate as 'expectation' in this case. As the year progresses we will see if they meet the expectation.

Hurts are the kind of band who will have lovers and haters. Right now we love their style (some say Johnny Hates Jazz are a reference point, but we think they are cooler than that) ,their pretentious but articulate interview technique and of course their music. They are how we like our popstars. We also like the fact they haven't played any gigs yet and are opening with 2 shows in the UK in unusual venues. Breaking More Waves will be in attendence at the Hurts Wiltons Music Hall gig in London, so expect a write up here !