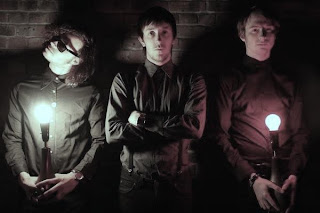 Mirrors are a band formed from the ashes of Mumm-Ra, but the phoenix that has risen from the flames is a very different beast. Rather like the way that White Lies were a different proposition from their previous incarnation Fear of Flying, Mirrors are much removed from Mumm-Ra. This three piece are an artily cool pop-noir keyboard toting band whose sound references early OMD, Depeche Mode and Blancmange.

Rather like The Cordelier Club who we featured last week, Mirrors have only one song available to the world at large at this moment in time, the restrained and haughtily highbrow Look At Me. From this song it’s easy to imagine the band shooting videos that are stylish, dramatic and intelligent, parading the dark shadowy streets of an Eastern European city wearing long overcoats whilst giving furtive sideways glances to camera over their upturned collars. After all this is a band who include amongst their influences François Pierre de la Varenne, who codified French cuisine for the age of Louis XIV, left wing journalist Wilfred Burchett and composer Claude Debussy. Pretentious ? Quite possibly yes, but this is not a criticism. It’s about time bands started making a claim to distinction with their reference points. So whilst Mirrors rifle through the works of Erwin Blumenfeld and the records of Kraftwerk, New Order and The Human League, we’ll leave you with this simple low budget film of the song Look At Me.

Email ThisBlogThis!Share to TwitterShare to FacebookShare to Pinterest
Labels: Mirrors

La Roux and now Mirrors... has someone decided it's time for another 80's revival? Not that I'm complaining - I just feel I should be getting ready to go back to school again.

Ha. Just noticed that their second 'influence' on their MyFace page is Kimmo Pohjonen - the avant-garde Finnish accordionist... that's probably enough for the Finns to claim them as honorary Finns if they get successful!

Yes, it's true there are lots of synth bands out there who sound as if they are from the 80's. La Roux is doing really well here in the UK. Her single went in the charts at No.11 and has now climbed in the Top 10. Very early days for Mirrors, but I like their sound.