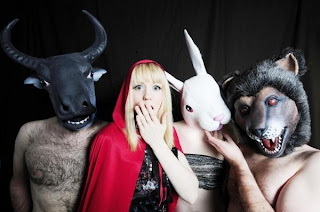 Since we first featured Run Toto Run at Breaking More Waves there has been a change of personnel and also a change in musical direction. Now a finely balanced four piece of two girls and two boys, the band have thrown out their folky recorder school hall assembly sound and replaced it with a lilting toy town piece of gentle electronica. It also seems that the band have developed a devilish style of dressing up like animals, rather like Breaking More Waves alter ego DJ persona DJ Hojo Hits.

Released on the 8th June, new single Plastic Gold is a colourful music box of a song which will make you dance like a clockwork marionette. “If the truth is really told, my joy for you is plastic gold,” sings Rachael Kichenside, with one of those genuine unaffected voices that sounds like it doesn’t have to try too hard and yet manages to be quite graceful and lovely all at the same time. And whilst Rachael adds some comforting oh oh woahs, xylophones, bass, keyboard sounds and clattering clapping merge in a slightly odd dreamy way. Not quite as instant as previous single Your Face, Plastic Gold flourishes with repeated listens. Click on the Run Toto Run link above to visit the bands Myspace and hear the tune. The band will be playing gigs around the UK this summer.
Posted by Breaking More Waves Blog at 00:01