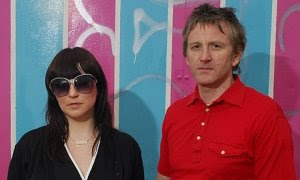 With Noah And The Whale now assaulting the charts with banjo’s and ukulele’s and The Ting Tings showing that the boy-girl pop duo is a long way from dead, the time would seem just right for a band like Oh Atoms. Debut single Sugar Mouse is a sherbert saccharine summer folk pop song that conjures images of boy meets girl under a shimmering sun. And from where this came from there is more sweetness to follow with songs such as Brooklyn Cheesecake and Ice Cream Blonde likely to feature on an album You Can’t See The Stars From Here, being released sometime this September.
Oh Atoms are Marc and Gwen and both have a musical history, having been around the block as members of a variety of other bands before they got together. However, none of their previous groups have had the commercial potential that Oh Atoms have. Inspired by 1930s tea dances, victorian darkness, dead film stars, suspicious circumstances and selected confectionery, this is a band that the word ‘nice’ really suits. Having recorded a pick and mix selection of songs in a Hackney attic the band have been lucky enough to gain some early exposure with single Sugar Mouse making its way onto the soundtrack of teen movie Angus, Thongs and Perfect Snogging, the latest movie by Gurinder Chadha, the director behind cult favourites Bend It Like Beckham and Bride & Prejudice.
So, if you like your music whimsical and cute, full of star filled skies and candy kisses, Oh Atoms could just be the sort of band you would like to hug up to in your fleece pyjamas.
http://www.myspace.com/ohatoms
Posted by Breaking More Waves Blog at 22:29

"So, if you like your music whimsical and cute..."

Well, that would be you then...