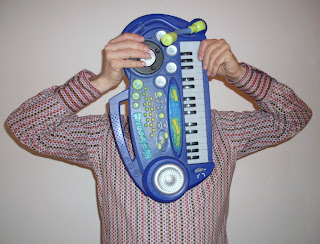 One of the more unlikely ‘stars’ of this years Bestival Festival on the Isle Of Wight is a certain DJ Hojo Hits, a man who by his own admission has no DJ ability whatsoever. This maverick, from the south coast of the UK is planning to DJ an hour long set of songs which consist solely of those recorded by eighties synth pop star Howard Jones. Yes, that was the man with the spiked blonde hair and a mime artist called Jed. If you are young enough to not remember Jones, here he is back in the eighties.

Howard Jones - New Song
Jones had a series of worldwide hits including New Song, What Is Love, No One Is To Blame and Things Can Only Get Better. He still performs today, and later this year will be celebrating 25 years since New Song bounded into the Top 5 in the UK with a big show at the Indigo O2 in London.
So who is DJ Hojo Hits, and how did he come about ? Well this is what the man himself had to say when I caught up with him the other day. “It all came about when a group of us ran a two year internet campaign to get Howard Jones booked for the Bestival. The campaign failed, but instead Radio1 DJ and Bestival organiser Rob da Bank has allowed me to do this DJ set, after I wrote him a poem which I posted on the Bestival forum. I think Rob da Bank said yes just to get me off his back,” laughs DJ Hojo, who seems strangely familiar to me.
So what started as a bit of a joke, seems to have taken off in a strange way. DJ Hojo Hits has become a bit of a hit with regular Bestival go-ers.
“I’ve had quite a few messages on the Bestival forum from people who say they are going to come along and dance to my set. It’s all a bit bizarre. One so called fan from the U.S.A has even set up his own DJ Hojo Hits unofficial website !” The site is http://www.djhojo.com/
So if you are attending this years Bestival, get there early and search out the Hidden Disco on Friday afternoon where a man dressed in a bad 80’s pop star wig will be DJing badly with no mixing skills whatsoever, playing Howard Jones CDs in a shambolic, yet strangely sincere way. All DJ Hojo Hits asks is that you learn the words to New Song and What Is Love?
So is DJ Hojo Hits actually a fan of the real Howard Jones ?
“Absolutely. I’m a massive fan of Howard Jones and a massive fan of Bestival, so this will be a marriage made in heaven!”
And who is DJ Hojo Hits really ? The mystery isn’t hard to solve. DJ Hojo is closer than you think. Here's a video on You Tube which reveals his identity...
DJ Hojo Hits revealed (Video 2 of a series)

Catch DJ Hojo Hits and his Howard Jones CD’s at The Hidden Disco at Bestival on Friday 5th September between 2pm and 3pm. He will also be appearing with the bands Bastila and Finger Monster at Waverley Park, Isle Of Wight on the 3rd September playing a non Howard Jones set of Bestival inspired tunes.
The real Howard Jones will be playing at the London Indigo O2 for his 25th Anniversary show on 20th September and as part of the Portsmouth and Southsea Music Festival on October 12th 2008
Posted by Breaking More Waves Blog at 20:09