The B Of The Bang - New Waves @ Breaking More Waves 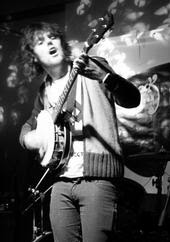 The B Of The Bang are the most recent signing to the Jelly Maid Music label, which was formed in 2007 by Richard Tamblyn who has previous production and engineering credits with Lou Rhodes and The Strange Death Of Liberal England.

Strolling out of Portsmouth, UK, The B Of The Bang are a collective of musicians lead by songwriter, wandering minstrel and lead vocalist Christopher G Whitear, who sings with a deep, dark, brooding baritone that will appeal to fans of bands such as Joy Division and Interpol.

Having released the self financed Citizens EP earlier this year, the band have just released a further four songs via the Souls EP. This release demonstrates that this is a band who are prepared to cast their musical web wide with four very different platters being served. Seeds bears distinct similarities to Editors with its commanding repeated vocal of “Seeds were there for you to sow,” chanted over a brooding elegiac bass line. Elsewhere melancholic beauty can be found through organ and xylophone on The Making Of The Making Of. There is also the squalling noisy rock of Little Bean, probably the most formulaic of the four songs on offer, before the EP finishes with the delicate medieval acoustic lullaby of Desire Lines, a duet featuring the haunting vocal of Jessica Spencer.

The band state that their sole purpose is to sound unlike anything else you've ever heard whilst sounding exactly like everything else you'd ever want to hear. An ambitious, if slightly confusing statement; most people prefer to wallow in the warm comfort of hearing sounds that they are familiar with, rather than wanting to hear sounds unlike anything they have ever heard. But then ultimately maybe The B Of The Bang are doing this for themselves, and to use a cliche, if anyone else likes what they do, it’s a bonus.

In the live arena, just like the assortment offered on the EP‘s, gigs by The B Of The Bang are also constantly evolving and changing, offering something new almost every time. From epic building rock with songs such as Lung, shown on the video below, through pulsing dark new grave electronica with added detuned lo fi guitars, to new folk with banjo, mandolin and accordian. This is not a band who are constrained by musical boundaries. Even limits between audience and performer are sometimes broken, with the whole group having been known to play fully unplugged in the middle of the crowd; or to lead everyone outside of the venue pied piper style. You simply never know what you are going to get. One thing however is certain and that is that an album is on its way, currently being recorded for release later this year or earlier next, preceded by a further single.

Portsmouth is not known for its rich musical heritage, its insularity and ability to not look at the bigger picture often holding bands from this south coast city back, but The B Of The Bang do have a wider, bigger, varied perspective that should stand them in good stead.

Looking forward to Souls; found Citizens on iTunes at the beginning of the summer and been keeping it on heavy rotation since then.

Huzzah! The Citizens EP is a great introduction to The B of The Bang, and Souls is another slice of four great tunes, that serves as a great teaser to the forthcoming album.

The B of The Bang are one of my favourite bands it Portsmouth. Initially I dismissed them as too experimental and avant gardé, but I agree, live they really shine, giving many joyous moments every time I see them.

I can wait to hear the album, as recorded so far, I feel the EPs lack some of the punch and enthusiasm you get from a live show.