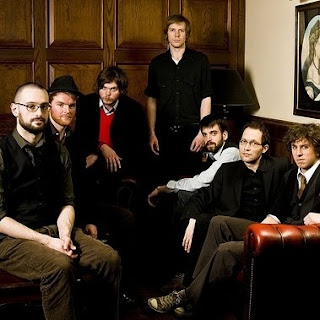 Broken Records produce the big music. Multi layered songs that powerfully build to exuberant crescendos, with violins, trumpets, cellos and guitars; there are comparisons with Arcade Fire, Hope Of The States and The Waterboys in what they do.
Formed in Edinburgh, it will take only one listen to One Good Reason to convince you of their merit. It is the sound of a violent bar room brawl in eastern Europe with violin wielding gypsies charging through the melee, kicking everything out of their way. But not everything they produce has such aggression. Take their new single, Slow Parade which is released on 7” vinyl in August through the Club Fandango record label. It starts with a mournful falsetto before moving via tinkering piano to a gorgeous swooping blissed out ending. The word beautiful should be used reservedly, and today I reserve it for this song. Here it is recorded at the Rockness Festival in Scotland a few weeks ago.

Broken Records @ Rockness Festival 2008
Broken Records music is based on the use of traditional instruments, and it appears that their philosophy and approach is also very much of this nature, building a profile steadily this year, through playing soaring live shows that have received some glowing reviews. There is no Myspace or other social networking buzz about the band. They’ve just been getting out there and connecting with people in the way that groups used to build a fan base before the internet came along; and are all the better for it.
http://www.myspace.com/brokenrecordsedinburgh
Posted by Breaking More Waves Blog at 21:51