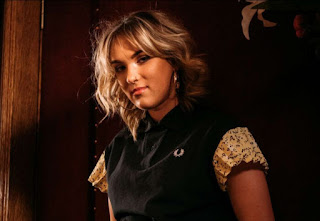 For the final Breaking More Waves One to Watch for 2022 we travel to Scotland for the third time in three days to reacquaint ourselves with Rianne Downey – an artist that first featured on Breaking More Waves back in April. At the time of that post there were references to Patsy Cline, Dolly Parton and Katy J Pearson. Those references still hold true, as well as the description of Rianne being ‘a new acoustic-country queen’. What Rianne does is the stuff of classic singer songwriters all sung with a golden voice that rides atop a twangy, ghostly backing; she makes the sort of songs that are primed ready for that American road trip, singing along with the car window down.

Since that April post Rianne has released her debut EP Fuel to the Flame in September and won hearts and minds with festival slots and appearances alongside last year’s Ones to Watch and now UK number 1 selling album artists The Lathums.

If she can continue this trajectory and match the songs on the EP in 2022, Rianne Downey could be the bright new star of country pop. Catch her on tour next April.

Last on this list of 10, but not least, keep an eye and ear out for Rianne Downey.

Email ThisBlogThis!Share to TwitterShare to FacebookShare to Pinterest
Labels: Ones to Watch 2022, Rianne Downey