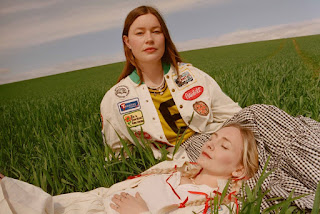 Two things that I’m a big fan of are musicians in the bath* (so many of them do promo pictures this way but nobody can explain why) and slightly idiosyncratic singers. Often the two go hand in hand as they did back in 2016 when I wrote about rising Isle of Wight musician Rhian (here) Since that time we haven’t heard a lot from her (she released the songs Time Traveller and Solid Gold in 2018) although she has popped up singing with fellow islanders Plastic Mermaids at some of their live shows.

However, now Rhian (full name Rhain Teasdale) returns alongside jeweller / musician Hester Chambers with a new project Wet Leg. Their debut is a gem of an indie pop anthem called Chaise Longue. It’s totally different to her solo work (the vocals are less Joanna Newsome and more in the vein of the current trend of spoken ASMR pop) and will get you on first listen. It does it with a simple but propulsive backing, sharp guitar riff and quick to absorb lyrics that will undoubtedly find audiences chanting along with them. Phrases like “I got the big D” and “Excuse me, what?” deserve to be shouted back at the band in sweaty rooms across the country. Chaise Longue is undoubtedly the first time I’ve ever heard someone ask “Is your muffin buttered” in a pop song and “I’ve got a chaise lounge in my dressing room and a pack of warm beer that we can consume,” is one of my favourite amusing or is it just real life (?) lyrics I’ve heard for a while.

Then we come to the video. Which is simple, but brilliant. Dressed in old time country dresses and hats Rhain delivers the words deadpan whilst Hester lurks around being somehow sinister and comical at the same time (watch out for the high kicks) her face covered by her hat. It doesn’t sound that interesting but by the end it will have you in giggles and in love with the song.

With the Isle of Wight already bringing us Plastic Mermaids, Coach Party, Lauran Hibberd, Champs and Roberta Fidora it’s a highly fertile breeding ground for new music. Soon they’ll be able to run their own festival with no mainlander artists at all.

Wet Leg are the latest newcomers to that list and on the basis of this debut they’re a very worthy addition.