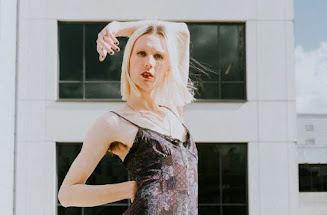 We all know the rules of pop, right? Don’t make your song more than 3 minutes long, because modern attention spans just can’t cope with any more than that can they? Especially if it's your debut single.

Alice Low, from Cardiff, clearly hasn’t read the rules. Debut single Ladydaddy clocks in at a superbly absurd 14 minutes long. Of course, there’s a shortened radio edit but forget that. You need to dive fully in, if only to hear the opening lines “Trying to work out what it takes to turn a man into a doll, go into town with my best fuck me face mask on.”

What Alice Low does is ridiculous but brilliant. Ladydaddy is a bewildering journey into weird 70’s pop via the world of an acoustic bar room singer, sax solos, Bowie, glamorous excess, camp stomp, and ideas that dart and propel themselves around like an energised pinball. You never know what's coming next, but you can be 100% certain it won't be like Lewis Capaldi. Think Sparks at their most eccentric and you’re possibly getting a little closer. Ladydaddy sounds so completely unlike anything else from 2021; it’s gloriously refreshing and inventive, if also a little perplexing at the same time. You won't be finding this played on daytime radio (although I can imagine the radio edit sneaking onto BBC 6 Music).

Ladydaddy was released a couple of weeks ago via Clwb Music. Truly bonkers pop music that doesn't play safe.