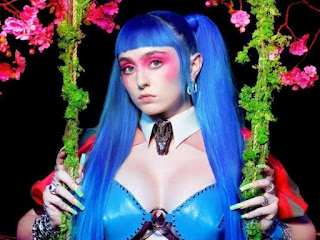 The first choice on the Breaking More Waves Ones to Watch 2021 list is the one that I debated the most in terms of her inclusion. Not because she isn’t good (she’s great) but because with one UK top 30 single already under her belt, over 100 million streams of her track Stupid (featuring Young Baby Tate) on Spotify and tracks dating back to 2017 on the streaming service, she doesn’t feel particularly ‘new’ any more. Yet she meets the criteria I set out in my previous post and has still yet to release any sort of long player; a mix tape comes early in 2021 though, which at 10 tracks long should surely be considered an LP?

If you haven’t heard her yet, here’s the low down.

With her colourful, hyper stylised looks and hooky, contemporary sound Ashnikko is undoubtedly the artist on this list most likely to be continuing the commercial trajectory she’s already started on – not only with her music but her merchandise as well. Tentacled penis candles anyone? Yep Ashnikko’s probably the only musician out there flogging those. She was really one to watch in 2020, but even more so in 2021.

Email ThisBlogThis!Share to TwitterShare to FacebookShare to Pinterest
Labels: Ashnikko, Ones to Watch 2021