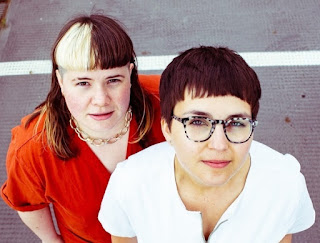 If there’s one word to describe Brighton based 2-piece Arxx it’s powerful. Powerful riffs, powerful lyrics, powerful vocals, powerful performances. Taking the drums and guitar route used successfully by the likes of fellow Brightonians Royal Blood as well as The White Stripes, Arxx are a force. A garage rock band with a strong DIY / punk ethos. Hannah Pidduck (Vocals, Guitar) and Clara Townsend (Drums) have been making music together since 2017 and have been slowly building their profile through word of mouth to the point where today their new single Y.G.W.Y.W (You Got What You Want) has made it onto the Spotify New Music Friday Playlist.

I’ve seen arguments recently that focusing on playlist placement is the wrong strategy and that artists need to have a longer-term vision of building real fans. But I think that’s not necessarily correct - it's less black and white and is possible to focus on both and that seems exactly what Arxx are doing. There’s a slow build going on here, with people gradually discovering their music, which leads to a few good slots on playlists which will help them find worldwide listeners  as they continue to grow.

I first became aware of the band when I saw their name listed as support for another act I like last year. Unfortunately, I wasn’t able to make the show but having checked the band out online I was impressed. There was a rawness, a big punch of sound and despite their rock base they possessed a pop sensibility in so far as they had hooks, lyrics that you could holler along to and tunes that would stick in your head. It’s why a few months later I approached and booked them for Portsmouth’s Dials Festival (Oct 5th, 5 venues, Albert Road, Southsea, in support of Solent Mind – Full details and tickets can be found by clicking here) and was delighted when they agreed to play.

The new single is a great example of what the band do: Explosive riffs! Song structures designed to make you want to punch the air! Chant ready lyrics! Get ready to yell along at the top of your voice: “You’re messing with the wrong girl honey.” Arxx rock.

Email ThisBlogThis!Share to TwitterShare to FacebookShare to Pinterest
Labels: Arxx