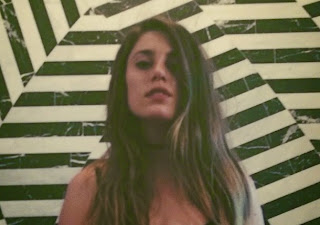 Having gate crashed the internet this summer with OctaHate, Ryn Weaver got a number of music commentators on the world wide web pretty worked up. Why? Because it seemed there was some serious industry backing in the promotion of the song. Benny Blanco, Passion Pit’s Michael Angelakos and Cashmere Cat produced the track, Charli XCX co-wrote it and the likes of Jessie Ware, Hayley Williams and Tom Krell of How To Dress Well all quickly tweeted about it shortly after it was released. The words “manufactured pop act,” were the words that came to many minds, a concept that here at Breaking More Waves we couldn’t care less about . We’re don’t carry the same mindset as Nottingham singer Jake Bugg, who once told The Sunday Times "Manufactured pop bands, they don't have any heart, they don't have any soul. It's really sad for me, when you work hard at what you do with your guitar, and then you pop the radio on and it's like some weird trumping sound coming out of it.” This of course was said by a man who doesn’t even use his real name to perform under and whose debut album was co-written with a number of hired co-writers, including one who has written Kylie Minogue and Liberty X. Maybe we need to have a conversation about the word manufactured Jake.

Our point is this. In this day and age arguing about the process of manufacturing and authenticity in rock and pop is a bit silly. Pop has always been about collaboration. Even the most ‘real’ or ‘authentic’ band will often use an engineer and / or producer in the studio to help them create the best recorded sound – this in itself is a manufacturing process. What is so inherently bad about collaboration? Any artist that thinks that they have all the talent themselves and don’t need help from others has a very high self-deluded opinion of themselves or really are bloody good. Some are good singers, some good song-writers, some good performers, some good producers. But very few are all of these on their own.

So we come back to Ryn Weaver. Her debut EP was the product of many talents. It was that collaboration that produced a recording of quality pop. But one excellent EP is very different to a brilliant album or a long term career. It’s why Ryn Weaver has to be One to Watch in 2015, can she (and whoever she works with) deliver the goods time and time again? Time will tell.

Email ThisBlogThis!Share to TwitterShare to FacebookShare to Pinterest
Labels: Ones to Watch 2015, Ryn Weaver

Your unconvincing defense of manufactured pop stars has a very tenuous, desperate, barrel-scraping tone to it. These are people who can't play music or write songs, yet they are enjoying far more exposure and success than bands and actual ARTISTS who write, play, and sing. Isn't it obvious that people who write, play and sing are undeniably more talented than someone who only sings?

Then you try and say that all musicians are on the same level as (for example) One Direction just because they've worked with others on their music? That's lowering the bar and looking at things in a VERY black and white perspective. Really sad that more and more people are being hoodwinked by this manufactured garbage the industry is spoonfeeding the masses.

"Some are good singers, some good song-writers, some good performers, some good producers. But very few are all of these on their own..." REALLY? You quite sure about that? I think you'll find there are many artists who can do all those things, and because these artists value their creative control, they don't want to sign to major labels. So major labels will mostly only sell manufactured pop as a result. and because the major labels still have all the money and influence over the industry, manufactured pop is all the general public get to hear.

"Artists" like One Direction are getting away with it because of a growing apathy and because of slipping standards. Shouldn't creativity and artistry be valued? If not, it's very much a case of inverse snobbery.

Absolutely sure of it. Yes of course artistry and creativity should be valued, but having full creative control doesn't always produce quality in all departments. Sure sometimes it does (in 2014 the likes of Young Fathers demonstrated it is possible) but judging on the 100's of submissions this blog gets weekly from artists who are doing things themselves the vast majority do not have the whole package. Sometimes there's a great vocalist with a great song but its poorly mixed or produced. Other times the recorded version is brilliant but the band can't cut it live etc etc. These are times when some help is required. Many modern artists that are considered to have created an artistically brilliant body of work such as Bjork, PJ Harvey, Arcade Fire, Manic Street Preachers etc all have had help in some respect. Even the 'greats' like Bowie, The Beatles etc did.