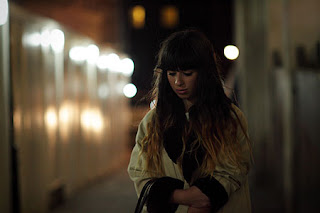 If you’ve read Breaking More Waves for any period of time you’ll know that we have a strong penchant for female singers. In fact Hype Machine tags this blog as being one to investigate in particular for female vocalists. Therefore it makes absolute sense that of our 15 Ones to Watch for 2012, 9 of them will be bands or solo artists that feature female vocalists.

Our fourth selection is one of those 9. We first posted about her back in August when she was still performing using her real name, Loui Rose. (Actually her real name is Louisa Rose Allan, but she’d dropped the ‘sa’ and the Allan by then.) At the time we suggested that this had the potential to make things a little confusing, what with another upwardly rising singer Lucy Rose bobbing about in the arena. Now, we don’t know if Loui Rose or whoever is working with her was thinking the same thing, but now Loui Rose is going by the name of Foxes. Which makes it easier for you, and easier for us, especially as we’ve already featured Lucy Rose in this list.

Because there’s a band called Foxes! from Brighton who have been going for some time now and so there’s only an exclamation mark between these two. We can see all sorts of potentially confused looking gig audiences in the future. Surely there must have been other animal names that were available for a new act?

Since that blog post in August Louisa Rose Allan / Loui Rose / Foxes (maybe we should call her Loui Fox, although that wouldn’t work because according to the Guardian there’s a mysterious silent partner in the back with Loui who goes by the name of Sam, so actually Foxes is a band, just like the Brighton lot, although Popjustice says the Guardian is incorrect, so now we’re even MORE confused) seems to have picked up a fair amount of record industry attention and now she’s releasing a single via boutique pop label Neon Gold – the people responsible for the debut singles from Marina & The Diamonds and Ellie Goulding. Whether this means that Foxes already has a major label working behind her and the Neon Gold release is just to wow the tastemakers and give her credibility or not is unclear to us, but ultimately it’s irrelevant.

The important issue is the music.

Youth is the Neon Gold track and is is exactly what you’d expect from that stable. A high production value pop song with dance crammed edges formed with epic showers of shimmering synths and cluttering carnival percussion – it may not be quite as instant as early Marina and Ellie tracks did but it improves on repeated listens.

But there’s better to come.

You may remember that our August blog featured a demo of a song called Night Owls Early Birds. It sounded like a less muscular Rolling In The Deep by Adele and was particularly impressive. Along with the rest of the Loui Rose Soundcloud account it’s been taken offline now, so you’ll have to be patient to hear it in some fully produced form.

Don’t expect to see Foxes all over the place in the early part of 2012, but as the year progresses, watch carefully. We will be.

Home by iamfoxes
Posted by Breaking More Waves Blog at 08:30

Email ThisBlogThis!Share to TwitterShare to FacebookShare to Pinterest
Labels: Foxes, Ones To Watch 2012

If you’ve read Breaking More Waves for any period of time you’ll know that we have a strong penchant for female singers. In fact Hype Machine tags this blog as being one to investigate in particular for female vocalists.

That's one of the reasons why I like your blog.

Cool :) Plenty more female singers in the future no doubt :)