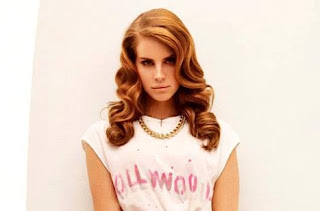 Initially we weren’t going to include Lana Del Rey in our list of Ones to Watch for 2012. There’s been so much written about her on the internet that it seems that another post from a small scale blog is almost pointless and arguably she's already so prominent in most music fans minds that bringing attention to her really isn't required.

By the end of 2011 with just one single release and a handful of shows Del Rey has received so much under the microscope analysis that you have to wonder how she can ever survive it. Is she authentic? Does she really write her own songs? How much money has she had thrown behind her by her major label? Can she sing? How much of what she does is an act? Why has her debut album under her real name Lizzy Grant been deleted? How many record company execs has she slept with to get where she is now? Are her lips real?

Let’s repeat that last one. Are her lips real?

Yes the internet has become such a dissecting gossipy beast that grown men (and some women too) are spending their time discussing how real Lana Del Rey’s lips are. When you think about it, it really is pathetically lame.

Del Rey seems to have become an internet discussed phenomena in a way that is childlike and sometimes borders on misogynist. Never before has a single new artist been subject to such inquiry and analysis, much of it based on pre-conceived assumptions, sometimes without accurate fact checking.

How on earth can Lana Del Rey survive the hype both musically and personally? Those who hate her will, like an abusive parent to a tiny toddler, continue to kick her down even before she’s had the chance to walk. With such levels of uncontrolled exposure, those who like her could also become sick of hearing about the most talked about new artist of 2011. Del Rey has said herself in interviews that she’s stopped reading what people are writing about her because it upsets her. If she continued reading she would probably have become sick of herself as well. It’s true that some of the negative writing about her has been particularly vicious, to the point where you have to question how the internet is affecting society – would these writers say what they write to Del Rey's face? If not then this is assassination by stealth.

This is why Lana Del Rey has to be one to watch for 2012. The question is can she survive the onslaught of the hype machine? Last year in this list we named The Vaccines who also had to ride the wave of over-exposure (albeit not of the tsunami proportions that Del Rey has experienced). The Vaccines rode the wave well by getting their heads down and concentrated on playing lots of gigs and festivals, weary of the press and blog adulation. Even when lead singer Justin suffered a haemorrhaging vocal polyp they got back on the road as quick as possible after. By the end of the year the band can look back at a solid if unremarkable debut UK top 5 LP, sold out gigs and personal relationships in the band that have held together well.

There’s a potential lesson there for Del Rey. The hype will eventually die down. The cynics and doubters will move on to find something else to cast their negativity on. If she focuses on what actually brought her to our attention in the first place – her intriguing, otherworldly music, she may just survive.

Let’s remind ourselves of that music. Back in May 2011 Breaking More Waves was the first Hype Machine listed blogger to post a stream of the song Video Games in the world. Since then that post has become one of the most read posts on our blog with 1000’s of hits. It remains a sublime, slightly disturbing song about control in a relationship and is one of our favourite pieces of music released in 2011. The video (playing below) has had over 6 million views on You Tube. Let’s see what 2012 brings.

Email ThisBlogThis!Share to TwitterShare to FacebookShare to Pinterest
Labels: Lana Del Rey, Ones To Watch 2012

I'm completely with you on "it's the music that counts". That said I was quite surprised to hear her on German mainstream radio only a few months after you discovered her.

I even heard Video Games as a background jingle for some TV ad recently.

I don't remember that happening before that fast. To be fair I'm not that long in the brand new music hearing business, though.