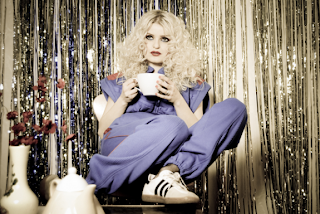 Recalling the early days of Madonna or a disco-down Kylie, Nottingham’s very own singer, songwriter, producer and remixer Ronika is readying her new double A sided single Only Only / In The City for release on September 26 through the Record Shop label.

In The City streams below.

This is all about the dancefloor but with pop sensibilities running through the gaps between the tiles. It’s as if somehow Ronika has been locked away in a late 80’s New York basement club and only just found a way to escape.

Rather like Willy Moon who we featured yesterday, Ronika’s material may be stuffed and signposted with obvious reference points, but there’s really nobody out there doing this at the moment. “I’m just trying to increase the body count of people who have been knocked dead by my music,” she says. Knocked dead sounds a little violent for our liking, but In The City will certainly get you into the groove.

Email ThisBlogThis!Share to TwitterShare to FacebookShare to Pinterest
Labels: Ronika