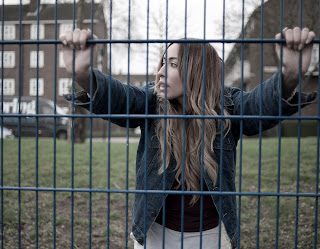 You know Delilah don’t you? No not the Tom Jones one, the other one. No? Well maybe not, because according to her facebook page she’s ‘the industry’s best-kept secret’, which is a bit of a strange thing to say considering that there are already plenty of web postings about her and a You Tube stream of her song Breathe has already received 84,000 views. If she’s a secret, those views are the size of Wembley Stadium whispering but getting louder all the time. Yet when we did a little asking around a handful of the more well established new music bloggers, none of them had heard of Delilah. So maybe she’s a secret after all, or maybe the blogs haven’t got their ears as close to the ground as you may think (for close to the ground read that they haven’t been contacted by the artist or their PR company yet), or maybe she’s just not very ‘bloggable’ in that her sound isn’t underground enough for the majority of blogs, or maybe we just asked the wrong bloggers, or maybe we're wrong and she's actually rubbish so bloggers don't care. Except us. Because we care. We care enough to write these few words during our summer holiday, when we shouldn't be posting blogs. If David Cameron has to be called back off his holiday whilst his country riots and loots and Obama has to shorten his because of Hurricane Irene, it's more than appropriate for us to take some time away from the beach to bring good new music to your attention.

So here’s our small attempt to blow the lid on this ‘secret’, that is if you haven’t heard Delilah before. Chances are you have, but just haven’t clocked the name yet, as she’s been working with Chase & Staus (we’re streaming their song Time below which features her vocal and to be fair is listed on a whole load of music blogs) but now she’s about to set out on her solo career. In fact she already has an album fully recorded and ready to go, which will be released at the beginning of next year.

So what does she sound like? (We'll keep this short because nobody wants to read paragraphs of verbose description of what the music sounds like when they can just press play and make their own judgements do they?)

Delilah’s songs are perfectly nailed urban mini anthems of sedateness swimming around in a dark pop undercurrent. That sounds a bit wanky, but it's true. There’s a strong similarity here to another Breaking More Waves featured artist Jess Mills, who has worked with dance producers (in her case Breakage) before venturing out on her own. Her vocals are top notch, all breathy and suggestive but with a restrained power. Listening to the fluttering mellow vibes of the Chakha Khan referencing Go we’re reminded of the likes of Sia, Massive Attack and Portishead in terms of atmosphere, or maybe Katy B in bed with Leftfield as does the string laden Breathe which you can download for free below. There’s upbeat stuff as well, such as Layby which you can listen to here, but we suggest that it’s these sultry, late night modern ballads that are the most effective. Now go listen.

Email ThisBlogThis!Share to TwitterShare to FacebookShare to Pinterest
Labels: Delilah

Not sure if this was meant to be funny but it made me chuckle.

Likewise not sure if everyone (anyone ?)gets my sense of humour, but glad you did.