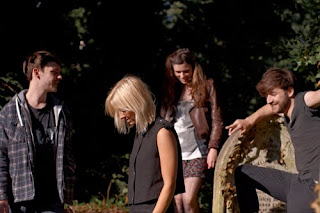 Listening to new music is like a personal relationship; there are fundamentally two ways of doing things. The first is the type of listener / lover who decides what they like at an early stage and then settles into a comfortable safe but possibly stale involvement. The sex is always the same, the conversations are always the same, it’s a humdrum routine of existence and the music follows a line of unimaginative duplication. This sort of person likes Viva Brother because they remind them of their younger years listening to Oasis and Shed Seven records. Or they will listen to Hurts because it awakens memories of the 80’s – the decade that they will proclaim all the best music was made. This sort of person probably only ever has sex in the missionary position.

Then there are those who always want to be excited by the new and different – never satisfied until their pulses are set racing by something challenging. Their kama sutra became well thumbed and worn out years ago and they're still looking for more. There’s a tendency for this type of person to set off on an exploration of new music discovery and to delve so deep that they end up in a mine so narrow and so underground that they find themselves isolated from the mainstream. It’s probably why some new music blogs start off covering reasonably well known bands but a year or two down the line are posting fuzzy, lo-fi groups that couldn’t put a melody together even if they were offered gold bullion.

Brighton based four piece Fear of Men have been getting a number of new music blogs who fall into the second category very excited. In many ways their music ticks the required boxes – their sound is relatively lo-fi, the sweet vocals are just that tiny bit flat but equally endearing and the sound is very old school / C86 indie. They have underground credibility. There is no chance of this band having a top ten hit single. Yet whilst Fear of Men may be exciting the deep miners, they just as easily fall into the ‘I only like having sex in the missionary position’ camp. This is because their songs are rooted in the traditional values of catchy hooks and jangly guitars – following a lineage that could include the likes of Velocity Girl, Talulah Gosh, The Shop Assistants and The Primitives. There’s nothing particularly original about what they do, but Fear Of Men have the savvy to write a pleasing pop melody.

Guess what? Sometimes it’s ok to have sex in the missionary position, as long as it’s giving pleasure. Today Fear of Men bring that satisfaction. Ritual Confession is out on 7″ through Italian Beach Babes on 22 August.

Email ThisBlogThis!Share to TwitterShare to FacebookShare to Pinterest
Labels: Fear Of Men