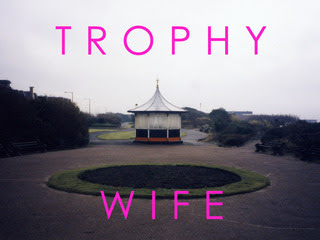 Oxford is doing pretty well this year in terms of putting out great music. Stornoway and Foals, both Oxford bands, have released albums that could well feature in a number of end of year lists including our own. Now here’s another group from the city of dreaming spires who are making us grin with tranced-up abandon.
Trophy Wife are a band that we first came across via the excellent Illegal Tender and Not Many Experts. Trophy Wife claim to produce ‘ambitionless office disco’ but actually produce self-contained ice-cube-cool rhythmic indie, the kind of indie that abstains from overtly rocking out and instead sets an objective of bringing the dance through the use of temperate chiming guitars, funky bass lines and soft disciplined vocals. The song Microlite, like its title, may at first seem featherweight and unheavy - you could expect it to fly away into the ether to be forgotten. However its subtle patterns and vocal chants get under the skin, or at least under the feet, forcing them to move, albeit in a gentle and modest way. Their cover of Joanna Newsom’s The Book of Right-On features ghostly whistling, a repetitive disco groove and soft apologetically unemotional vocals similar to what Delphic do on songs such as Remain and This Momentary, but Trophy Wife still make the song very much their own. Then there’s the percussive jam of Take This Night which is available to download below, which provides the bands biggest reference point.....
That reference point is Foals. In terms of grooves and breakdowns, there’s certainly a symbiotic relationship. It therefore seems highly appropriate that the band should be supporting Yannis and co on some of their Autumn UK tour dates in November in Birmingham, Bristol, Nottingham, Southampton and Brighton as well as a special MTV under 18’s show at Dingwalls in Camden, London later this month. At that point we’ll get the chance to see what they look like, their current photos (above) revealing nothing of the band. All we do know is that they are a trio who have suggested that one of their ambitions for this year is to play a show and spend their Sainsbury’s nectar points. They’re certainly going to achieve the first and if they use this no.2 shouldn’t be hard either.
It’s early days for Trophy Wife as a band but their gainful compositions seem designed for more than just the water-cooler moment at the ambitionless office they speak of. Prizes could be for the taking.
Trophy Wife - Take This Night by Breaking More Waves
Posted by Breaking More Waves Blog at 12:01

Hi yeah we saw that go up on line the other day but we've had no time to blog it :(