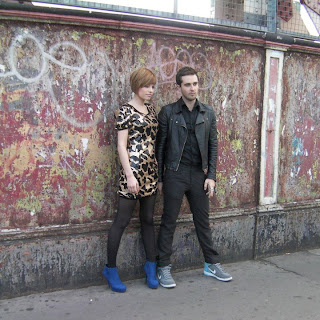 Here’s an unsigned duo who produce music that wouldn’t sound at all out of place in the UK Top 40. They are Lite N Dark - a boy/girl electro-pop group. He is Tim Talbot, a 21 year old Strokes loving Londoner with a sushi obsession, she is Katie McKenna a 17 year old Bolton girl who prefers House music and Hollyoaks. Even from this description, it’s easy to see where the name Lite N Dark came from.
It may be a cliché, but in the case of Lite N Dark, opposites really do attract, for Katie and Tim make big, colourful, exhilarating, danceable pop songs that can only be formed by people working well together. A prime example of their highly commercial and joyous sound can be found on Walk Away, where their contrasting vocal styles mix in a bassy rave-pop fusion. Katie’s strong voice wouldn’t be out of place on many a record you could hear on daytime UK pop radio whilst Tim’s distinctly pompous and over-ambitious vocal is straight out of the Human League / early 80’s school of dramatics, a kindred spirit to both DEKADE and The Modern who we have recently written about. It’s the polarised influences of the two individuals in Lite N Dark that ensure that Walk Away is not just another mediocre pop song. Listen and you’ll hear a Faithless like thrust of euphoria with an Erasure-esque disco pulse as waves of synths rush headlong towards the moment where the two sing “So if I can’t stop loving you, the fire can bring us together.” It's a pop banger ready to explode and make you go ga ga - and yes some of the sounds that Lite N Dark use would fit tidily onto that Ga Ga's The Fame. Take for example another song Nasty Boy, which features rapper Kay Maf delivering lines such as “ Yeah now I’m higher, yes I'm hitting the high notes like Mariah,” over sharp disco synths and a rippling bass line before Tim comes in with the chorus. It’s not quite as good as Walk Away, but the computerisations are still sharp and punchy.
Lite N Dark are incredibly new to the scene, their social networking sites having only gone live in the last few days. A first ever gig is just around the corner in Leeds on the 19th June, supporting Breaking More Waves favourite Unicorn Kid. Although it’s early days, it’s easy to visualise the sound of Lite N Dark’s perfect production values blasting out of the radio. For now, you can download Walk Away and Nasty Boy from the bands Bandcamp page which streams below.
Posted by Breaking More Waves Blog at 00:01

Didn't really understand this blog until I heard the 2nd song - Walk Away and then I got yr references.

The first track with the rapping is a bit generic, the 2nd track is a complete mash up of 80's styled vocals with a massive modern sound.