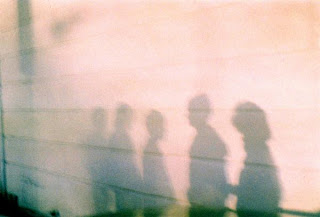 Just when the whole synthtopia genre appears to be setting off down cliche street, someone grabs the map and pushes us down another alley. NewIslands are a Midlands band whom with their track Out Of Time have produced an alluringly giant piece of pulsing keyboard pop. Now pop is an over used word right now, NewIslands themselves have admitted this stating in their blog that it's "Like saying I love you to someone you've been seeing for three months - the honeymoon period - it's over!" Yet when the pop is good the pop is good, and to deny it is churlish. Out Of Time joins the dots between the sugar-camp of The Sound of Arrows and the more dignified and anthemic song structures of Hurts. The vocals of singer David Jones in particular share a similar resemblance to those of one Theo Hutchcraft, but with a slightly more muscular edge. We’ve already filed this one in our not often opened top drawer labelled ‘Giant lush synth tunes’.
The song has had support from Breaking More Waves favourite DJ Rob Da Bank of Radio 1, and comes complete with remixes by two other acts that we’ve blogged over the last few months - Active Child and Is Tropical - so it’s a kind of remixed new act heaven. Our opinion ? Out Of Time by NewIslands is a truly exhilarating piece of pop music. But let's not call it pop music, let's call it POP music. Amazing.
No.
A.M.A.Z.I.N.G
Out Of Time is released as a single tomorrow.
Posted by Breaking More Waves Blog at 22:01

Email ThisBlogThis!Share to TwitterShare to FacebookShare to Pinterest
Labels: NewIslands

A BREATH OF FRESH AIR at last .Its good to be alive thanks .

Awesome tune and video - and they produced this with no MAJOR record label help I hear ?

really like the video, it works well with the song and the edit is really good.

Wow! this is a great song, so glad i came across this... summer soundtrack? i think so!

I heard an amazing remix by Timo Garcia on the radio the other day. Think this one's gonna blow up!

Been following this band for a while, really glad they are getting the recognition they deserve, Amazing song!!!!