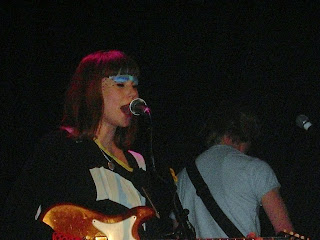 Before you read this review of Kate Nash at Brighton Komedia, if you haven't done so yet, read the backstory of our romance with her music here. It places some context on what you will read below. Once you've done that, we can continue.
Sometimes pop stars go bad. Throughout the chapters of pop history we’ve seen it happen. Whether it’s the drugs, the alcohol, the inflated ego, the desire to be experimental and artistic or the influence of the leftfield boyfriend or girlfriend, it’s never a pretty sight or sound. From Robbie Williams commercial failure Rudebox to Kevin Roland of Dexys Midnight Runners wearing a dress and recording an abomination of cover versions, there’s nothing worse than a mainstream pop star going experimental yet forgetting that change must also be of merit, have quality and be engaging. Based on this gig at Brighton Komedia, a low-key warm up show for the forthcoming release of her second album, My Best Friend Is You, Kate Nash is another name to add to the list of pop star casualties. For a good 75% of this gig Nash seems committed to potential career suicide.
Things start well enough, as she bounds on stage in a flurry of black and white, looking like she has just escaped from a Mary Quant fashion shoot. She settles immediately, if slightly breathlessly, into the triumphantly breezy 60’s girl group influenced You'll Never Listen. It’s immediately hooky, catchy and straightforward; a future single in the making. Following up with the playful Pipettes-gone-surfing Doo Wah Do and old single Mouthwash, everything so far seems to be on familiar territory. But as the set develops it becomes very clear that the world Kate has been inhabiting for the last two years – dating Ryan Jarman of The Cribs, reading feminist literature and listening to acts such as Bikini Kill and Sonic Youth, has had a profound negative influence. Kate ditches the piano almost completely to play both electric and bass guitar to a backing that ranges through musical textures of the rough, angry and shockingly amateur. It’s like watching a sixth form band have their first ever jam session in a garage.
Introducing one song as being about “Homophobic pricks” the lyrics are “I’ve got a secret I can’t tell you. You would judge.” And that’s it - just repeated over and over again in a jaded nursery rhyme chant over gravely lo-fi guitars, before she finally adds “Why can’t we be friends, you can’t pretend,” at the end. Considering that Nash has been away for two years you have to wonder what she has been doing with her time. This ‘song’ must have taken all of five minutes to construct. The one line repeated trick is used again on the visceral I Just Love You More, which at least has some energy as a redeeming feature, but leaves most of the audience scratching their heads and longing for Foundations, which never comes.
Unfortunately the Nash vocal just isn’t suited to the material. Whereas bands like Yeah Yeah Yeahs or The Pixies ( possible reference points) have a strength of voice that delivers, Nash comes across as a precocious spoilt brat, howling and screaming like a banshee. She’s far better when she’s playing a quiet if lyrically childish ditty that starts by listing all the things she hates ( falling over, grazing her knee) followed by a list of things she likes ( cream teas, strawberries, ghost stories). Although somewhat cringeworthy, at least here her voice is soft, almost come-to-bed seductive and the overall effect is sweetly touching. This is in sharp contrast to the moment when she unleashes a pent up feminist monologue against male rock star behaviour and the audience are barraged with a host of expletives of how she wants to be “fucked” and that “it’s a cold shower and a scramble for a dirty pair of knickers.” She apologises to the fans at the front, explaining that the words are not about her, but it still makes for an intense and uncomfortable listen.
Quite how all of this coarse sound will appear in a recorded form remains to be seen. With Bernard Butler (Duffy, Black Kids etc) at the helm there is some hope that out of this mess will come something coherent and engaging, but on the evidence of this gig it seems that Nash has jumped off the cliff and forgotten her parachute. We commend her for her bravery, but the rudimentary performance and lack of quality in over half of the songs leads to a massive sense of disappointment. Towards the end of the gig Kate suggests that now these songs are the audiences to take and nurture. There don’t seem to be many volunteering to do so. As baffled punters leave the building after very little attempt at demanding an encore, the question being asked is “What on earth was she thinking of?”
A shorter 'remixed' version of this review features at The Dirty South
Posted by Breaking More Waves Blog at 00:01

Couldn't agree with your review more, saw her at Bethnal Green Working Men's Club the other night...she was quite disappointed. Hope someone will give her a good shake and tell her to get back to what she was good at doing, rather than this shoutey nonsense.

The thing is, I have no problem with 'shouty nonsense' when its good 'shouty nonsense.' Take a song like Debaser by The Pixies - shouty, mad lyrics, noisy tune but absolutely fantastic. Kate wasn't.

After our earlier conversation, I'm half tempted to say I like this new direction, just to annoy you further, but as Riot Grrl fan who loves shouting, it just doesn't seem genuine. I've gave the myspace recordings a few listens but unfortunately it just seems to loack something. If she has actually decided to engage in some serious feminist discourse then it doesn't really show it and it all seems rather out of context. It's like reading a chapter, rather than the whole of a book. I was never a fan in the first place, and this hasn't changed anything, however good on her for somewhat trying to stop singing childish conversations that belong on playgrounds.

I think she's genuine about what she does - but as the author says - it just isn't very good. The likes of Bikini Kill, Huggy Bear etc did this stuff well - Nash doesn't. Maybe it will come with time if she pursues this route, but by then her label will have probably dropped her.